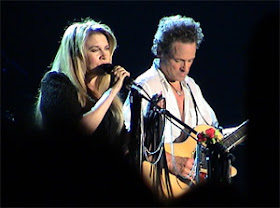 by: Russell Hall
Gibson Magazine
On March 1, a reunited Fleetwood Mac will hit the road for their first concert tour in five years. Concurrently, an expanded CD/DVD package of the band's landmark 1977 album, Rumours, will hit record stores. In the following interview, guitarist Lindsey Buckingham talks about the differences between his work in Fleetwood Mac and his solo work. He also shares his thoughts about his distinctive six-string style.
Wasn't your very first guitar a cheap Harmony acoustic?
That's right, although I first learned some chords on a plastic ukulele. There was a TV show called The Mickey Mouse Club, which marketed a smaller version of what the guy on the show played. When I was about eight years old, I got a Harmony 6-string three-quarter-size guitar for Christmas. I think it cost about 35 or 40 bucks.
Did you feel an immediate facility for the instrument?
It's hard to say. I had been exceptionally interested in music before then, although I didn't have any lessons. I was tuned in to my parents' record collection, which ranged from the South Pacific soundtrack to Patti Page to my Dad's collection of Dixieland Jazz 78s. I was always interested in what was making those sounds. Then, when Elvis Presley came onto the scene, there was a role model, visually, and music that subverted our parents' sensibilities. It was something we could call our own.

When did you first try to write songs?
I didn't write until 1972, near the very end of the first band that Stevie and I were in. Stevie had been writing tunes since she was in high school, and thought of herself as a writer-poet. Actually, I still don't think of myself as a writer. I think of myself more as a stylist. It still comes in bits and pieces — the process of putting a song together.
You play without a pick. Beyond technique, does that make you feel more of direct connection to the guitar?
I think so. It has its good and bad points. It can be a little sloppy. Sometimes, on-stage, when I'm playing lead, I'll look down and see that I'm just thrashing around. I don't know what I'm doing with my fingers, and it looks sort of odd to me. In that sense, yes, it's completely connected to something inside. But I think other people probably feel that connection with a pick, because they've done it that way for so long.
How did you get into finger-picking at such an early age?
Part of that stemmed from not taking lessons. As a child, I found my own way, in a manner that made sense to me. I wasn't doing finger-picking right away, but I strummed with my hand, because I didn't know any better. But even Scotty Moore had an element of finger-picking and orchestral playing going on. The other thing was, before the British Invasion occurred, a lot of folk music became popular. In that music, of course, you're talking about basic Travis-picking, which everybody was learning to do. I also became interested in trying to learn some of the fast banjo-playing style that a lot of people were doing at the time.

You've talked in the past about a certain Dave Mason album that had a big impact on you as a lead player.
That's right. That album — Alone Together — came out in 1970, at about the time the original band Stevie and I were in was breaking up. I was trying to embrace lead playing, and the things Dave Mason was doing on that album seemed to mesh with what I was aspiring to do. He wasn't trying to be technically proficient, and the playing had a plaintive quality that fit what I was already doing, as an acoustic player.
What adjustments did you make to your style, when you and Stevie joined Fleetwood Mac?
It was an exercise in paring down. There wasn't as much room to establish any sort of style statement, in terms of what I had done on the Buckingham Nicks album. The band's pre-existing sound made it difficult for me to even play the model of guitar I had been using. The electrics I had played had always been either Stratocasters or Telecasters. And both those guitars sounded a little anemic, within the band. Therefore I switched over to something "fatter," which, at the time, was the Les Paul.
Are there things you can do as a solo artist that you can't do within the parameters of Fleetwood Mac?
I don't think there's any one thing. It's more a case that maybe there are things you can do only once, on a Fleetwood Mac album. There are lots of things on the [2006 solo album] Under the Skin album that are just one guitar, or two guitars, and voice, and nothing else. Politically, that would be fine in Fleetwood Mac as a one-off type of thing. But on Rumours, for instance, you wouldn’t want to have four songs like "Never Going Back Again." It just wouldn't have been appropriate.
The reunion tour begins in March. Your thoughts?
I think there's still quite a bit of road that we need to walk together, in order to put things in a certain place, with regard to interaction. For that reason alone, there's an interest for me in reconvening, to see if we can approach things a little more humanly. Stevie and I have some stuff to work on. That, in and of itself, becomes intriguing. I've known Stevie since I was about 16, and we've been through things together that no one else has. We know each other awfully well. It should be fun.
Nickslive at Wednesday, February 04, 2009
Share