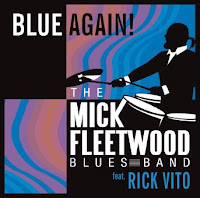 SET FOR RELEASE IN NORTH
AMERICA ON 429 RECORDS

SANTA MONICA, Calif., Feb. 12 /PRNewswire/ -- Revisiting the blues-based classic songs of early Fleetwood Mac, along with completely new songs in the same style, iconic rock drummer and band co-founder Mick Fleetwood has assembled a hand-picked quartet of musicians, The Mick Fleetwood Blues Band, who've created a stunning new live recording, BLUE AGAIN. Equal parts blues rave-up and loving homage to the early incarnation of Fleetwood Mac, BLUE AGAIN is a fiery blues showcase and heartfelt tribute to Fleetwood Mac who are just beginning their 40th Anniversary celebration. BLUE AGAIN will be released by the Savoy Label Group unit 429 Records, in time for the kickoff of a triumphant world wide tour on March 3rd via an exclusive package on iTunes and on CD March 17. A companion high definition DVD is scheduled for release in the summer.

Produced by Mick Fleetwood and former Fleetwood Mac member Rick Vito, BLUE AGAIN was recorded live at the Sheldon Concert Hall in St. Louis, Missouri in February of 2008 and sees him teaming up on this recording with guitarist and lead vocalist Rick Vito, bassist Lenny Castellanos and keyboardist Mark Johnstone. The immaculate recording gives the songs a vibrant, modern immediacy which transcends easy nostalgia. Says Mick: "Over my career I've been called a pop star and a rock star, yet in my inner heart, I will always be part bluesman. On my journey from blues to a life of rock 'n' roll, I've always remembered where I started." BLUE AGAIN is both an original musical tour de force and a respectful tribute to Fleetwood Mac initiated by the sole member of the band to be in every incarnation from the beginning.

Track listing for BLUE AGAIN is as follows: 1. Red Hot Gal 2. Looking For Somebody 3. Fleetwood Boogie 4. Stop Messin' Around 5. Rattlesnake Shake 6. When We Do The Lucky Devil 7. Love That Burns 8. Bayou Queen 9. Black Magic Woman 10. I Got A Hole In My Shoe 11. Shake Your Moneymaker 12. Albatross.

429 Records is a unit of the Savoy Label Group (SLG). SLG is the North American unit of CME (Columbia Music Entertainment), the oldest music company in Japan. The Savoy Label Group has evolved into a leading independent company consistently outperforming competitors in key music categories as monitored by Billboard Magazine. SLG is led by Steve Vining and CME is headed by Chairman Strauss Zelnick, founder of Zelnick Media which owns interests in and manages an array of media companies.