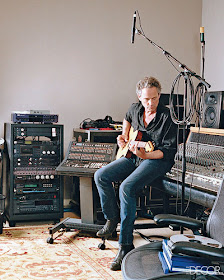 Elle Decor Magazine
(More Pics)
Haute bohemia meets 1920s elegance at the home of rock musician Lindsey Buckingham and his interior designer wife, Kristen.
Written by Deanna Kizis • Photographed by Simon Upton • Produced By Cynthia Frank
Anyone arriving at the Los Angeles home of Kristen and Lindsey Buckingham — of Fleetwood Mac fame — should be prepared for a boisterous family welcome.
Son Will, 10, and daughter Leelee, 8, tumble out of a car with their tennis instructor, while an exuberant Stella, 4, greets guests wearing a red velvet holiday dress—even though it's 80 degrees—as she bosses around the three dogs. Kristen appears, herding kids and proffering coffee, all the while insisting she makes truly terrible coffee.
It's a warm introduction that befits the beckoning Norman-style house, which was built by architect Kevin A. Clark. An aficionado of period details, Kristen used legendary Hollywood architect Wallace Neff's homes of the 1920s as inspiration and kept an office on-site in a trailer during the construction. "I was here every day to answer questions," says Kristen, an interior designer. And while her approach features occasional bohemian flourishes, it's often rooted in research on historic buildings and interiors. "I wanted our house to look authentically Neff and have a feeling of quality in the surfaces, moldings, and cabinetry," she explains. She also wanted it to feel livable for her active brood. "I'm not a fan of volume," Kristen says. "Two-story entrance halls echo, and kitchens with walls knocked out for a loft effect are popular but impractical. I wanted everything to have a human scale." This philosophy is reflected throughout the five-bedroom abode, where cozy alcoves abound. The master suite includes a snug reading room, the dining room has a bar area perfect for card games, while the kitchen abuts a charming breakfast nook. And the entrance hall's winding staircase—modeled after one in decorating icon Nancy Lancaster's beloved family home in Virginia, Mirador—is striking without feeling grandiose.
Kristen's look—"a combination of traditional and edgy," as her husband calls it—and many of her own designs, are best showcased in the dining and living rooms. In the former, a Directoire-style mahogany table is surrounded by green leather chairs embossed with crests and studded with brass tacks (she is reproducing these in her new home-furnishings line). The walls are papered in Zuber's high-spirited L'Hin doustan pattern, and chandeliers lend a chic contrast to plank ceilings. Paintings and photography fill a wall behind a black-lacquer piano in the living room, while a brightly upholstered Dunbar-esque sofa echoes the vivacity of the art display. "My pieces are all very personal, and I like to layer things," she says. "And I'm not an art snob. I like what I like." 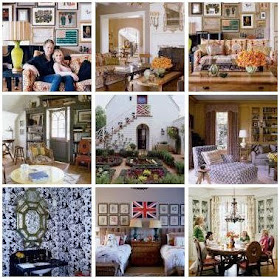 Before she became a designer, Kristen was a portrait photographer; she met her husband on an assignment 13 years ago. "I went to the studio to shoot some guy—that's who Lindsey was to me then," Kristen recalls with a laugh. "He dropped some corny line like, 'Haven't I met you before?' We had a drink and have never been apart since." Of his wife's talents, Lindsey says, "Kristen intuitively applies her sensibilities across genres. She's a gifted designer, photographer—she's even written lyrics for me." But Kristen sees their disparate professions as a plus: "I can't sing or play instruments, and he doesn't decorate. I'm convinced that's why our marriage works. That said, I love his taste and always ask his opinion."
Of course, no musician's home would be complete without a state-of-the-art recording studio. Lindsey's is located beneath the garage for soundproofing and boasts a soundboard so large it had to be lowered in with a crane. Since it is fully equipped with comfortable furniture, a bathroom, and a kitchenette, "a few guys working full days have all they need so they never have to come into the main house," Kristen says.
For a family that loves outdoor sports, there's a large, lush lawn for croquet and badminton and a pool for daily swims. "Lindsey used to be a competitive swimmer, and his late brother, Greg, was a medalist in the 1968 Olympics, so it's a sport that's close to his heart," Kristen notes. The poolhouse was inspired by an image from designer David Hicks's book My Kind of Garden. Just outside the living room is the loggia, where sun-bleached wicker chairs and a vintage Baker cocktail table supply the perfect setting for board games with the kids. Says Kristen, "We play a lot of Yahtzee. It's great to be out here and not sitting in front of the television."
Kristen even designed their master bedroom to open onto the garden—a change from the family's previous house in Bel Air. "We used to be on the second floor, very high up looking down at the city," she says. "It was a beautiful view, but it often felt kinetic and unrestful." As the sun starts to set, Kristen opens the door to the terrace from the bedroom, the sounds of her kids playing outside filling the room. "This is what we wanted—to feel connected to our surroundings."
Nickslive at Thursday, February 12, 2009
Share