Fleetwood Mac '09
Nostalgia, cash and a tale of two divas named
Stevie and Lindsey
Chicago Tribune
by Greg Kot
As the relationship between Stevie Nicks and Lindsey Buckingham goes, so goes Fleetwood Mac.
The band, formed as a British blues-rock outfit in 1967, has a history that reads like a soap-opera script. Band members have literally gone crazy. Some have gone AWOL. Others have slept with one another. Marriages were broken. More than 73 million records have been sold. And still the quarrels continue. Even a 2004 tour that raked in $22 million ended in acrimony, with a fed-up Nicks saying she was through and Buckingham returning to his solo career.
But now, on the eve of another Mac tour, the biggest problem facing Nicks is a sore arm. While being interviewed, she mentions that a physical therapist is working her over. “I strained my right arm doing arm curls, which I never do, so I’m trying to get it back so I can comfortably and enjoyably play tambourine.”
Such are the rigors of being a multimillionaire icon in a band that defined mainstream pop in the ‘70s. Mac is commanding as much as $149.50 per ticket (plus service charges) for a national tour that includes two concerts March 5-6 at the Allstate Arena. They promise few surprise; just a show with more than two hours of greatest hits --- just the way their fans presumably like it. “The songs we’re playing are the tapestry of not only our fans’ lives but our own lives,” Nicks says. 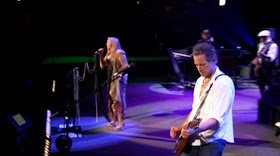 Buckingham has long detested the idea of doing a nostalgia tour, but he says he’s “just trying to ride the machine.” Part of Mac’s on-off existence the last three decades has been due to Buckingham’s creative restlessness; he’s maintained a solo career defined by adventurous albums in between Mac projects. As one of the band’s primary songwriters as well as its producer and arranger, Buckingham is first among equals, and his word goes a long way in determining Mac’s fortunes. This time, he agreed to do a hits tour to promote a box-set release of the band’s best-selling 1977 “Rumours” album.
“There’s still a push-pull inside me that says I need to redefine myself creatively, but I did two solo albums in the last three years, so it allowed me to feel a little more relaxed about doing something like this,” he says. “I am very consciously going into this not wanting to drive anyone in the band crazy if I can help it --- and sometimes it doesn’t take a lot for me to do that. My priority is working on the interaction within the band, especially between me and Stevie. I’m doing a tour that the industry and the listeners and the rest of the band want, and maybe sow some seeds of stability for once.”
That sounds like a man compromising his artistic instincts in the name of peace, harmony and cash. Buckingham laughs.
“Why am I doing this? It’s a good question… let me see, why am I doing this? Well, we’ll probably make a ton of money, and that’ll make everything a bit easier. But the other reason is that there’s unfinished business with Fleetwood Mac. Stevie left the last tour saying she wasn’t going to do this again, and that’s not right. It’s been a difficult road, we’ve been through a lot, and I want to see it play out and come out the other side in a bit better place than we were last time.”

Mac’s last tour followed the release of a 2003 studio album, “Say You Will.” That’s where the troubles began. Buckingham had interrupted his solo work to make the album with Mac, and brought finished songs into the recording session. Christine McVie had retired from the music business, leaving Buckingham and the founding rhythm section of Mick Fleetwood and John McVie to focus on Nicks’ songs. Buckingham and Nicks already had a long, fractured history; they were former lovers and old tensions would resurface whenever new conflicts emerged.
“It felt weird, working for nine months in a Bel Air mansion on just my songs,” Nicks says of the Los Angeles recording sessions. “It started to grate on everyone. It started to grate on Lindsey. It ended up not being our happiest album. Then we went on tour, and it was just a continuation of something that had already gone off track.”
Nicks says the departure of Christine McVie had a huge impact on band chemistry: “She was the voice of reason.” Nicks hunted for another female foil after the tour ended. “I vowed not to do it again unless we had another person who could act as a buffer,” she says. She recruited Sheryl Crow, but the singer backed out when she realized how big the commitment would be.
“She just had a baby, and once you’re in Fleetwood Mac, you don’t have a life of your own,” Nicks says. “It’s like joining the National Guard and being deployed to Iraq in two weeks.”
Well, no, it isn’t, actually. But melodrama is as much a part of Fleetwood Mac as hit songs.
Nicks says she agreed to hit the road with Buckingham and risk opening up old wounds again because she sensed a change in her old sparring partner. “He has little girls who are 8 and 4 years old, plus a wife, and he has been living in girl land since coming off the road in 2005. It’s softened him up. Instead of treating me as a miserable ex-girlfriend, he’s looking at me more like a beloved daughter. He’s been very nice and loving to me. This is the guy that I met and fell in love with when I was 17, and I hope it stays that way. No one could come in and make peace between us. Lindsey and I had to.”
Buckingham says if they pull off the tour without any meltdowns, there may be yet one more Fleetwood Mac studio album down the road. But he makes no promises. He has left the band in the past, and he says he will again if he feels things are growing stagnant.
“We all want this to work,” he says, “but there are only 45 dates scheduled. I’m sure there are people in back rooms somewhere talking about more dates in America and elsewhere in the world, but nothing is in the books, nothing has been agreed to. In this band, it’s best not to plan too far in advance.”
Fleetwood Mac's revolving door: A timeline