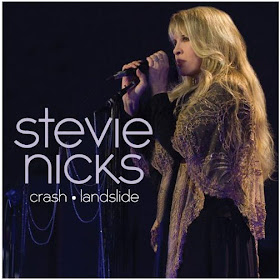 Stevie Nick's cover of Dave Mathews "Crash" taken from her "Soundstage Sessions" cd will be released as a single through Amazon.com on March 17th. Previews of the two track single are up on the Amazon site.

The two track disc including "Landslide" has been serviced to Triple A Radio stations in the US and is "Available For Airplay" 3.16-17. That basically means it's available for the Music Directors of the Triple A radio stations to consider adding to their rotation. So if you have a Triple A station in your city or town - Request it be played...
The track is making some impact at radio, but it's early days. This week (3/11) in order for a song to hit the top 50 of the Triple A Radio Play Chart - a track would need to have a minimum of 192 spins at radio. "Crash" currently has 12 spins this week at radio & building. Last week it was played three times on the Triple A stations that are tracked. So hopefully within the next couple of weeks it picks up the pace and cracks the top 50 if the Music Directors are successful in adding it to their rotation, and if the feedback from their audience is positive.
To check if you have a Triple A radio station in your city or town to request that "Crash" be played, check out the Radio and Records site, scroll down and hit the "Station Links". 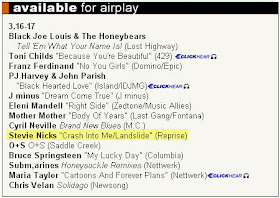