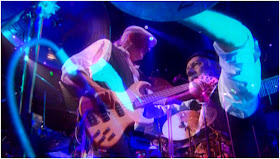 Early in the fourth show of Fleetwood Mac's Unleashed tour, guitarist Lindsey Buckingham referenced the group's "fairly complex and convoluted emotional history," drawing a laugh from the crowd and even some knowing smiles from his bandmates.

But can there be a Fleetwood Mac without the drama?

The Unleashed outing makes a case that there certainly can. For the group's first tour in five years there's no new album and therefore none of the attendant tension that comes when introducing fresh material. Everyone is purportedly getting along well these days. And the group has had even more time to adjust to life without Christine McVie, now 11 years (but only one tour) removed from Fleetwood Mac.

What that leaves the Mac and its audience with is hits -- an abundance from one of the most successful catalogs in rock history, more than enough to keep the two-hour and 20-minute show airborne from start to finish. The Fleetwood Mac that's trotting around North America now is comfortable in its position and is cheerfully celebrating its legacy, and the warm familiarity of its 23-song greatest hits set is likely just what its fans -- particularly those paying $80 or $150 for their tickets -- want.

The parade began with "Monday Morning" before sliding into "The Chain" and "Dreams," each in their usual No. 2 and 3 positions on the set list. "Gypsy," "Rhiannon," "Sara," "Landslide," "Gold Dust Woman," "Go Your Own Way" and "Don't Stop" had everyone singing along. And the group still managed to deliver a few surprises including "Tusk," album deep cuts such as "I Know I'm Not Wrong" and "Storms," the return of "Second Hand News," and a rendition of McVie's "Say You Love Me" with Buckingham and Stevie Nicks trading verses.

But more than ever, the Unleashed show underscored the fact that in McVie's absence, Fleetwood Mac has become the Buckingham and Nicks show -- which does not minimize the continuing strength of drummer Mick Fleetwood and bassist John McVie as a rhythm section or the six additional musicians' role in bringing a studio-quality sheen to the songs. It gave the night two distinct flavors -- Nicks' ethereal cool and Buckingham's manic edge.

It's an equation that gives a dominant edge to Buckingham, with his fluid, finger-picked guitar styles and aggressively inventive melodies such as "Go Insane" and a solo acoustic rendering of "Big Love." He delivered a spirited take of the original Fleetwood Mac's "Oh Well (Part 1)," then tore the roof off with a searing solo at the end of the slow-burning "I'm So Afraid" that made it as much a highlight as any of the set's bigger hits. Nicks did rise to the occasion with her 1983 solo hit "Stand Back," and had the night's last word with "Silver Springs," but even she seemed respectful of, and perhaps resigned to the sheer force of her former boyfriend's musical personality.

Buckingham noted during the concert that "every time we get together again it's always different, always a sense of forward motion, and we always have more fun." The Unleashed show is more like a holding pattern, but few in the audience would deny there's fun in hearing all those hits.
Nickslive at Monday, March 09, 2009
Share