Four of the five original members of Fleetwood Mac lit up Long Island's Nassau Coliseum on March 13, 2009 during their one-night show in Hempstead. Embarking on their first concert tour in five years, the group chose to call the tour "Unleashed", which was a perfect description for the crisp, focused vocals and solid musicianship displayed on the stage. Without having to support a new album, the group was able to play all of the crowd's favorite hits and show off each member's unique personality.  Stepping to the front of the stage where they produced highlight vocals and sincere duets were former-couple Stevie Nicks and Lindsey Buckingham. Long parted, the two produced many fine memborable moments during the evening. Toward the end of the sweetly-sung "Sara", Nicks walked toward Buckingham on stage and let him lay his head on her shoulder as he smiled at the audience. During many of their songs, they earnestly looked toward at each other, giving the audience an up-close view into the dynamics of this duo. Before she sang "Landslide", Nicks told the crowd that she was switching from dedicating the song to her father to dedicating to Alicia Keys, "one of the most talented artists out there." On "Tusk", Buckingham started slow and quietly by singing, "Why don't you tell me who was on the phone; Why don't you tell me what's going on," then put all of his emotions into the song's refrain with wrenching animal cries that fit into Fleetwood's drum beat.  Throughout the show, Mick Fleetwood kept the band cooking with fine drumming while the audience was kept amused with his bug-eyed expressions or teasing facial tics. During one of the final songs, World Turning, Fleetwood was given a drum solo to display why he is still considered one of the leading drummers in the world. Fittingly, as the founding member of the group, it was Fleetwood who introduced everyone on stage, even "Stephanie" Nicks, better known to all of us as Stevie. He called John McVie his partner in crime and joked about how they've been playing together for 40 years.  John McVie was the more reticent member of the group. Even with a spotlight showing on him all night long, he remained toward the back of the stage, playing bass, but never making eye contact with the crowd or any of his band mates.  Missing from the group was Christine McVie, who has retired from the stage. Her vocals were replaced in the song she wrote "Say You Love Me" by a solid duet between Nicks and Buckingham. These two, plus Mick Fleetwood, carried the night with strong voices, incredible guitar and drum work, and an unabashed love for the audience, which was sent right back to the legendary group. The evening ended on a high note with the upbeat "Don't Stop Thinking About Tomorrow" anthem giving everyone a positive lift to a very positive show. 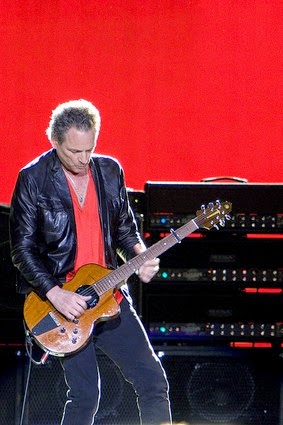 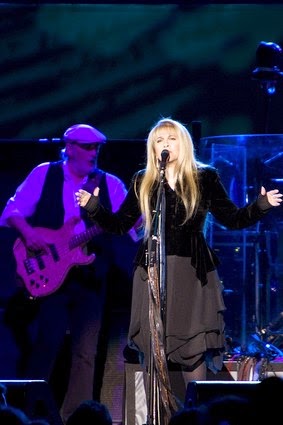