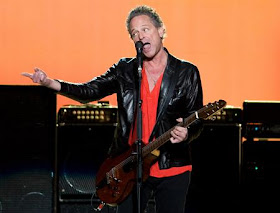 House lights still dimmed, Lindsey Buckingham and Stevie Nicks came out onto the Madison Square Garden stage on Thursday night holding hands, then took their positions at opposite sides of the stage and got into character: Ms. Nicks the romantic mystic, Mr. Buckingham the petulant cad. At points over the next two hours Ms. Nicks would cede the stage to her former lover, disappearing backstage as if she couldn’t bear to watch, or couldn’t be bothered. Probably the latter.

This is Fleetwood Mac, the golden years, catering to two different constituencies. Mr. Buckingham, with his extravagant gestures, indulgent guitar playing and general air of preening, was trying very hard to keep a flickering flame alive — a panting salesman. Ms. Nicks, on the other hand, appeared content with laurel-resting, coasting along on the familiar: the shawls, the twirls, the fringe dangling from her microphone and, occasionally, the piercingly cloying vocals. A screen with scrolling words — lyrics, presumably — sat at her feet.

As ever, the rhythm section — the drummer Mick Fleetwood and the bass player John McVie, for whom, together, the band is named — soldiered on like exceedingly tolerant parents. Mr. Fleetwood, ponytail intact and wearing short pants that brought to mind plus fours, played with force, if not grace, and Mr. McVie succeeded by not drawing notice to himself. In a band so obsessed with role-playing, such restraint qualifies as innovation.

“There is no new album to promote — yet,” Mr. Buckingham teased early in the night. But even the most rabid Fleetwood Mac fans probably don’t crave the distraction of new songs and were perfectly content with this show, designed as a hits revue and sticking closely to the band’s self-titled 1975 album and its follow-up two years later, the tragicomic “Rumours,” one of the biggest-selling albums ever. (These were the first with the band’s essential lineup, which included the Buckingham-Nicks combo and Christine McVie, who no longer tours with the band.) Here, particularly on the breakup songs from “Rumours,” Ms. Nicks and Mr. Buckingham still had a touch of zest, making for rare moments of lightness. (Mr. Buckingham also shined on a theatrically unhinged version of “Go Insane,” from his solo album of the same name.)

Mostly, though, the band sounded desiccated. On “I’m So Afraid,” Mr. Buckingham’s guitar solo, which he accompanied with hoots and hollers, was excruciatingly long, and excruciatingly dull. On “World Turning,” Mr. Fleetwood saw him, but thankfully did not raise him, with his own numbing solo.

And just as it did 30 years ago, the band succumbed to an obstacle of its own creation, and its name was “Tusk.” That 1979 album, driven by Mr. Buckingham’s experimental impulses, was an overreach, burdensome and needlessly decadent. Here, after the band played the title track and “Sara” midset, it never fully recovered. Introducing “Storms,” from that album, Ms. Nicks said the band chose it for this tour because they had never played it live before, though the turgid rendition that followed made it clear why that had been the case.

Unexpectedly, the night’s most invigorating moments came when the band stepped out from its own long shadow. “I Know I’m Not Wrong,” a song from “Tusk” played early in the night, sounded like the Replacements, as if the band had just discovered punk. And “Oh Well,” an electric blues from before Mr. Buckingham and Ms. Nicks joined the group, was a welcome nod to the band’s early history as a tribute to something bigger than itself.