FLEETWOOD AND MAC ON ROAD
Starbulletin.com

"I miss Maui," said Mick Fleetwood over the phone from Chicago. Fleetwood and John McVie, who lives on Oahu, have reunited with their Fleetwood Mac bandmates for a "Greatest Hits Unleashed North American Tour."

Fleetwood Mac is readying a special DVD/CD boxed edition of their 1977 album, "Rumours," which has sold 30 million copies already.

The band's four dates into the tour. "Business is incredible," notes Mick. "We are truly blessed to have loyal fans in this strange economic time." But, he notes, both he and McVie now have "too thin blood" to be happy in cold climes. 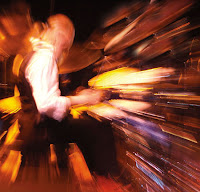 Also, from BlogTalkRadio - here's an interview with Mick Fleetwood from March 6th to promote his "Blue Again" cd to be released March 17th. Mick speaks briefly about how the Fleetwood Mac tour is going and how they are getting along.
Nickslive at Sunday, March 08, 2009
Share