It was a celebratory crowd that nearly filled Blue Cross Arena for Fleetwood Mac Monday, March 16. And I think most of them had filled their bellies at the Dino prior to the concert. The rib-running-jam was so backed up that the hostess pleaded via loudspeaker for patrons to exit their tables ASAP and move on over to the bar because hundreds of concert-goers were still waiting to eat. Last I heard it was a two-hour wait, but it didn't seem to dampen anyone's spirits. Everyone was happy as they strolled the bridge over to the arena. 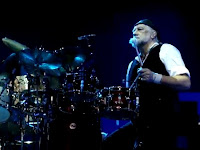 As they aren't promoting anything -- yet -- Fleetwood Mac is playing just for fun. And it could have been catching if enthusiasm for the concert hadn't already infected everyone. Most of the crowd spent the night up on their feet getting down, which made me wonder why-oh-why the promoter wouldn't book this as a general admission ticket instead of the dance-in-front-of-your-seat celebration that it was.

All the fave songs were played, and even if a few made me cringe inwardly at their corniness, I was more surprised at just how many of the band's songs are really, really good.

Lindsey Buckingham floored me with his playing; he gave his guitar such passionate spankings that I'm sure some bottoms blushed. And if you were in the nose-bleed section, it mattered not, as the videos were masterfully manned. Yeah, that was him looking right at me.

Mistress Stevie Nicks lived up to expectations, slowly swirling and twirling in her shawl-draped costumes, caressing the glittering boas adorning her mic stand, topping off songs with poignant silhouetted poses.

Mick Fleetwood, well, he was just insanely spectacular. Yes! We're with you! And John McVie's bass was profoundly anonymous, just like one should be.

When the band stopped playing, no one moved. After being called back for two long encores, we were finally too tired to put up much of a fight. If it could be possible, everyone left even happier than they arrived.
Nickslive at Tuesday, March 17, 2009
Share