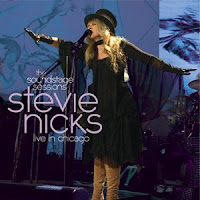 LEGENDARY ROCK QUEEN STEVIE NICKS’ NEW “LIVE IN CHICAGO” DVD AND “THE SOUNDSTAGE SESSIONS” CD SCHEDULED FOR MARCH 31st RELEASE
New York, NY - Stevie Nicks, rock’s superstar chanteuse, the “Gold Dust Woman” herself, will be releasing the “Live In Chicago” DVD as well as “The Soundstage Sessions” CD - both in stores
on March 31st, it was announced today by Reprise Records.
The “Live in Chicago” DVD includes all the timeless Nicks songs from her solo projects as well as songs written as a member of the legendary rockers Fleetwood Mac. Along with Stevie classics such as “Stand Back,” “Rhiannon,” “Dreams,” “Gold Dust Woman,” “Landslide” and “Edge of Seventeen,” the DVD also features stunning cover songs, including Dave Matthews’ “Crash Into Me” and a tear-down-the-house finale of Led Zeppelin’s “Rock and Roll.” 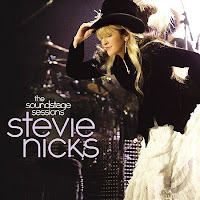 “This is the first time since 1985 that I have had one of my live shows filmed and recorded,” said Nicks. “We spent three years perfecting this show, which we began in Vegas in October of 2007. I could not move on until we filmed this show. Luckily “Soundstage” producer Joe Thomas, who saw the show many times, felt the same way. I am as proud of this as anything I’ve ever done in my entire career.”
Stevie Nicks “The Soundstage Sessions” CD includes 10 songs from the “Live in Chicago” DVD. Nicks brought the songs from the show to Nashville and worked once again with Joe Thomas in the studio where they added “Nashville strings” and additional vocals. The CD features a lush orchestral version of “Landslide” and other Nicks gems including “Stand Back,” “Crash Into Me,” “Sara,” “Fall From Grace” and “If Anyone Falls in Love.”

Digital downloads of “Crash Into Me” (”I’ve wanted to record this song for the last 10 years,” said Nicks) and “Landslide” (orchestral version) will be available on Amazonmp3.com on March 17th. “Enchanted,” an exclusive album track, is scheduled to be available on March 31st on Amazonmp3.com. “Gold Dust Woman” and “Edge of Seventeen” will be available exclusively on iTunes on March 31st.
“We wanted everything on the DVD and CD to look and sound perfect and I think we succeeded,” concluded Nicks.
Nicks is currently on the Fleetwood Mac “Unleashed” Tour, which began March 1st in Pittsburgh.
Nickslive at Tuesday, March 10, 2009
Share