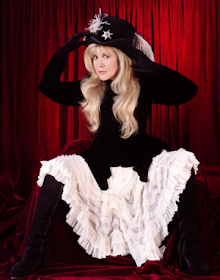 No computer, no cell phone, no facelift. ‘I am old-school all the way. School of rock.’

Stevie Nicks is a very busy woman.
Some 40 years into one of the most remarkable careers in music, she is touring the country with her famous supergroup, Fleetwood Mac, which still fills large venues with rapturous baby-boomer fans; she is releasing a new solo CD, "The Soundstage Sessions," as well as a new solo concert DVD, "Live in Chicago."
And that’s just March and April. So what’s with this sudden flurry of activity?
"It wasn’t meant to all be together," Nicks told wowOwow in an interview squeezed in during a short break in the concert tour. "Live in Chicago" was supposed to release last October, but with the Election, it was moved to this two-week period while the tour is on vacation."
What’s it like to be a rock goddess at the tender age of 60? "I would be lying to you if I told you it was easy. Our show is very hard and very long: two hours and ten minutes. Spinning around in seven-inch heels, it’s long. You have to be in really good shape. You have to take care of yourself."
In her new DVD, Stevie Nicks takes to the stage like the gypsy that she was: blonde hair to the waist. Morgane Le Fay wedding dress under a black jacket. Top hat. Feather. Ubiquitous scarves. As The Washington Post said about the Fleetwood Mac concert, "Nicks showed she still knows how to really work a shawl."
"I’ve never had a facelift and I never will. I stopped laying in the sun at 28. I never go to bed with makeup on. I have creams and lotions and I take 20 minutes of rubbing it in my skin … like a little biochemist." Nicks tells her many female friends now in their 30s, "If you think you’re not going to care how you look when you’re 60, I’m here to tell you: You are going to care more. When you’re young and thin and cute, beauty, it’s your world. You will be sorry, later on, if you don’t take better care."
When asked about her online life, she skips barely a beat: "I don’t have a computer or a cell phone. I am old-school all the way. I am school of rock."
"In 1983 when I was going out with the love of my life, Joe Walsh (legendary rock god of James Gang and Eagles fame), he had built a room in a loft filled with pianos." According to Nicks, the first time she heard a tune she had just picked out on an electronic keyboard instantly played back by Walsh with full orchestration, she realized, "Everyone, even the violinists had been replaced."
Later that year, Walsh told Nicks he couldn’t be with her on her favorite holiday, Halloween, because he had to work on his computer.
"That means I have also been replaced. If computers are going to replace me in a man’s life and replace those violinists …"
That was the end of Nicks’s relationship with computers.
So no Facebook, no tweeting, no MySpacing for Nicks. She does have an official website, a good one — The Nicks Fix — which she infrequently posts to, but is kept up-to-date by her webmasters. (Great pictures, by the way.)
When asked who she wants to come back as in her next life, she says she wants to return as her Yorkie/Chinese Crested mix. "She only wears Ralph Lauren. She always wears Ralph Lauren. She travels like a rock star."
__________________
Nickslive at Tuesday, March 31, 2009
Share