Fleetwood Mac: Yesterday's not gone
Fleetwood Mac's current jaunt isn't a reunion tour if you accept the notion that the band never actually broke up 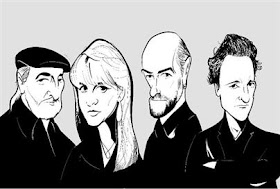 It's been more than four tumultuous decades of hookups and breakups, arrivals and departures, hits and flops. But, finally, Fleetwood Mac has found some stability within its instability and the band is going on tour to prove it.
The Canadian leg of their Unleashed tour kicks off in Toronto tonight, and band members Mick Fleetwood, Stevie Nicks and Lindsey Buckingham spoke recently about the state of the band, its place in today's music industry and why they chose to tour without any new material.
"You know, all of the changes we've experienced have been happening since the beginning," said drummer Fleetwood. "Band members have come and gone, but that's just how our story goes. Looking back on it, it hasn't always been easy -- surviving that change is actually somewhat of a miracle -- but it's who we are."
"We never think of ourselves as a band that's broken up," added Buckingham. "We just feel that there are times to be together and times to be apart ... and we take significant periods of time apart. Because of that -- and because we continue to evolve and gain insight and appreciation for the road we've been down and for each other -- the songs can take on a bit of a new life every time we revisit them."
This, in part, is the logic behind hitting the road now, despite not having a new album to promote. And while some may be tempted to simply call it a "greatest hits" tour, the group insisted this isn't entirely accurate.
"It's the first time we've done this," said Fleetwood, "and it'll be refreshing in that we're selecting really emotive, connective songs that we've enjoyed throughout the years, that we hope people will be familiar with.
"I would love to do another album, to make more music, but it ultimately comes down to bio-rhythms, how everyone's feeling. We have careers and families, and it's a different perspective than it was 20 or 30 years ago."
Nicks concurred, adding that as long as a musician keeps playing, regardless of how much new material is written, his or her sound will remain fresh and original. What makes a good concert has less to do with the specific songs and more to do with how they're performed.
In her case, a sense of enthusiasm and originality, at least at this point in her career, comes from alternating between solo work and collaboration.
"It's kind of a blessing and you never get bored that way," she said. "It makes for a more exciting and uplifting humour because you're not stuck doing one thing, year after year."
As well, the constantly shifting dynamic between Fleetwood Mac's band members adds yet another dimension -- after Nicks and Buckingham, who joined the band as a couple, split up, there was a great deal of tension that often had to be mitigated by former member Christine McVie, who was married to the group's bassist John McVie and eventually left the band for good in 1998. Nicks, for the record, insists she doesn't need a buffer anymore.
"Look," said Buckingham, "our mantra is: Have a good time and value the experiences we've had over the years; value the friendships and the history that really underpins this whole band."
CONTINUE
Nickslive at Tuesday, March 17, 2009
Share