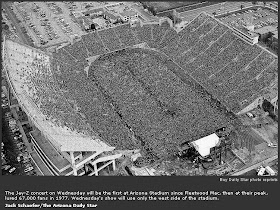 Back in the day with Fleetwood Mac


The last concert held at Arizona Stadium was headlined by Fleetwood Mac, which was touring behind the release of a little-known gem called "Rumours."

Described as the hottest band in the country at the time, Fleetwood Mac shared the stage with superstar artists Kenny Loggins and the Marshall Tucker Band, along with local band Arizona.

An estimated 67,000 people jammed the football field and nearly filled the stands that hot Saturday night on Aug. 27, 1977, to make for the largest crowd of rock fans Arizona had ever seen.

Tickets were $8 to $10, and the show grossed some $430,000. The Arizona division of the American Heart Association was the major beneficiary.

Still, authorities estimated hundreds of people got in free in the crush that ensued once the gates opened. The surging crowd knocked a deputy down a flight of stairs, and a 16-year-old girl was trampled and suffered an injured elbow.

Fans had started camping outside the stadium at 6 p.m. the night before, 23 hours before the music was scheduled to begin.

The concert ended about 11:30 p.m. after more than six hours of music. Fleetwood Mac played for more than two hours, and an Arizona Daily Star reviewer said Stevie Nicks' vocals and the guitar of Lindsey Buckingham stole the show.

Large clouds of marijuana smoke hovered above the crowd, along with sporadic flares and firecrackers.

Overall, authorities called the concert a peaceful event and nowhere near the mayhem they had prepared for.

Afterward, Chuck Raetzman, UA's superintendent of grounds, labor, maintenance and transportation at the time, was quoted as saying the field suffered no severe damage.

He added that if any part of the field was still faded by the time the Wildcats' televised home-opener rolled around, it would be painted green for television. The center of the field reportedly suffered the most damage from "compaction."

Concern over Arizona Stadium's field was one of the main reasons ASUA moved the stage to the sidelines, off the playing field, for Wednesday's performance.