The cycle for rock legends is numbingly familiar: Achieve stratospheric success, release a so-so album, fall off the top of the world, disappear for a bit and gradually — if luck holds — inch back into the spotlight for a potentially lucrative victory lap.
It has become a cliché that superstars like Fleetwood Mac know all too well. Fortunately, the star-crossed pair of Stevie Nicks and Lindsey Buckingham have carved out respectable solo careers, which not only allows the band to take much-needed breathers but also makes endeavors like the "Unleashed: Hits Tour 2009" an opportunity for, surprisingly, creative rejuvenation.
"[Having] solo work and Fleetwood Mac is a really great thing to be able to go back and forth," Nicks said in a recent conference call with the four remaining band members. "It really is kind of a blessing in many ways.  . . . It’s like it’s you never get bored.  . . . It really makes for staying in a much more excited and uplifted humor for everything that you do when you’re not just doing one thing year after year after year after year after year."
Fleetwood Mac, sans keyboardist Christine McVie, who bid the band adieu in 1998 (although she did contribute a bit to 2003’s reunion record, Say You Will), will play Dallas’ American Airlines Center on Thursday.
Back to basics
The multiplatinum rockers haven’t released any new material since Say You Will, nor have they toured extensively (this stop marks the band’s first Dallas performance in five years), and they are hitting the road without anything in stores or even on the horizon, aside from a possible re-release of the 1977 masterpiece Rumours. Freed from promotional obligations, the band is able to get back to basics, Mick Fleetwood said. 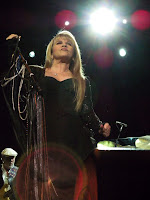 "This is the first time that we’ve gone on the road without an album," said Fleetwood. "It is, truly, believe it or not, a refreshing thing to do in terms of selecting a whole lot of really emotively connected songs to the audience that we’ve enjoyed having through the years."
Buckingham echoed Fleetwood’s sentiments, saying that the absence of commercial expectations makes the band’s famously volatile relationships less susceptible to explosion.
"What it does is it kind of frees you up to kind of enjoy each other a little bit more as people — the mantra is really more, 'Let’s just have a good time’ and value the friendships and the history that really underpins this whole experience that we’ve had over these years," he said.
"It takes a little pressure off not having to kind of reinvent anything this particular time. Because of that we are actually able to just look at the body of work and choose. And then just have a little bit more fun with it than we would normally be able to have," Buckingham said. 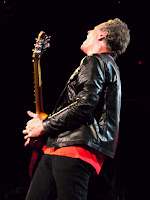 Still, pounding out the same hits every night — The Chain, Go Your Own Way, Don’t Stop or any of the band’s considerable string of smash singles — can be a precarious proposition. Become too comfortable and it looks as though you’re going through the motions. Change it up too much and you’re messing with what people plunked down hefty chunks of change to see.
"It stays fresh because we never stop playing," Nicks said. "Basically, what we are is entertainers. Even if this band had never made it big, we’d be playing all the clubs, we’d be still doing that. So when we go onstage, we’re performers. It isn’t a question of keeping it fresh because it’s what we love — we don’t have anything else, basically, to do."
A new album?
Inevitably, the question was raised about whether Fleetwood Mac would head into the studio and cut a new album once this tour wraps?
And, just as expected, the band tried to artfully evade answering.
"There have been discussions, for sure, that we would love to make some more music," Fleetwood said. "I think it’s really down to the whole sort of biorhythms of how everyone is feeling and what’s appropriate. We have careers and families and whole different sort of perspectives from what it would have been, you know, 20, 30 years ago, and going onwards from there."
Buckingham, while waxing rhapsodic about the opportunities he’s had as a solo artist, took a bit more expansive view of the future.
"We’ve been down this road — a long, long road together," he said. "In some ways we know each other better than we know anybody else. I think that we all want to dignify the road we’ve been down  . . . and I just think we all want to get to a place where we all feel that unity is waiting in the wings.
"It’s not that we’re not unified, but it is still a work in progress. I think that’s one of the main meanings of what we’re doing right now. So I actually feel quite excited to be able to go out and just relax into playing a body of work you know."
Fleetwood Mac
8 p.m. Thursday
American Airlines Center, Dallas
$49.50-$149.50
800-745-3000; www.ticketmaster.com
Preston Jones is the Star-Telegram pop music critic, 817-390-7713
Nickslive at Thursday, April 23, 2009
Share