REVIEW: Fleetwood Mac "Gobsmacking two and a half hour set" 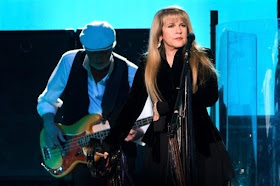 
"WE wanted to make music again," announces Lindsey Buckingham. "We have no album to promote so we're just going to have fun."

It isn't an idle boast. In a gobsmacking two-and- a-half-hour set, the guitarist leads the Mac - and a team of five backing musicians - through dazzling versions of classics like The Chain, Rhiannon, Big Love and a breathtaking Go Your Own Way.

While Stevie Nicks smiles, sways, twirls and sings like an angel, the rhythm section of John McVie and Mick Fleetwood drive everything along at cracking pace.

Buckingham himself, meanwhile, is on stunning form, letting fly with a silvered solo here, a chunky chord sequence there

One of the highpoints is a rare performance of the Peter Green classic Oh Well but, to be honest, it's hard to pick a standout in a show absolutely packed with them.

They finish with dazzling romps through Don't Stop and Silver Springs. Afterwards, Mick tells A-Listed he hopes to bring this greatest hits tour to Britain later in the year. Make sure you beg, steal or borrow to be there.