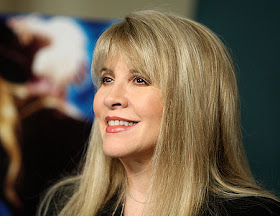 ROLLINGSTONE.COM
If we had a single regret about going to Australia with the Kings of Leon (for RS's current cover story), it would be that we missed Fleetwood Mac performing at Madison Square Garden. But, when we returned, we had the pleasure of lunching with Ms. Stevie Nicks, who was in New York to promote her new live CD-DVD, The Soundstage Sessions: Live in Chicago, a collection featuring some of her biggest hits and baddest rarities. We chatted about the first time she met Lindsey Buckingham (at a Mormon Party), and that time she unceremoniously dumped Don Henley.
But it was truly awesome to rap about "Silver Springs," an amazing track that was left off Rumours. The song is about her breakup with Buckingham -- "I'll follow you down till the sound of my voice will haunt you," she sings. "It was me realizing that Lindsey was going to haunt me for the rest of my life," she says. "And he has."
When she performs "Silver Springs" these days -- it's the final number on Fleetwood Mac's current tour -- Nicks resists the opportunity to get up in Lindsey's face: "I don't want fans to walk away in the middle of our argument."
Nickslive at Wednesday, April 15, 2009
Share