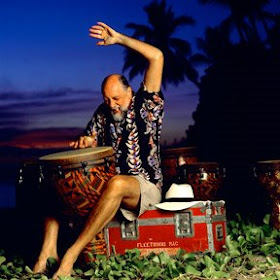 Mick Fleetwood Hawaii Band Video
by: John Heckathorn
Hawaii Magazine.com
(click for video)
"Maui is the place where I hope to live my long and healthy latter years," says 61-year-old Fleetwood Mac drummer Mick Fleetwood, who moved his entire family to Maui's Napili shorefront—wife, two twin daughters and his mother.
But make no mistake. Fleetwood has not retired. He's currently on tour with a (mostly) reunited Fleetwood Mac, currently in Texas, then points West, tour dates now scheduled through May.
However, as we reveal in the Mele section of HAWAII Magazine's May/June issue, Fleetwood can't stop playing, and now has two bands based on Maui.
First, the Mick Fleetwood Blues Band harkens back to the early days of Fleetwood Mac, when it was a four-man blues ensemble. Fleetwood took advantage of a hiatus in the Fleetwood Mac tour to fly back and rip up a Waikiki venue, Level 4, with the blues band, all of whose members live on Maui. The band's double live album, Blue Again, went to No. 18 on iTunes even before the CD release.
His second band is more Island-style. In addition to Vito, Mick Fleetwood's Island Rumours Band includes an array of remarkable Hawaiian musicians, including Willie K., Eric Gilliom, Lopaka Colon, and one of the strongest talents to emerge from contemporary Hawai‘i, Moloka‘i’s Raiatea Helm. What's it like? See and hear for yourself.
Here's great footage of the band and a video interview with Mick.
Nickslive at Wednesday, April 22, 2009
Share