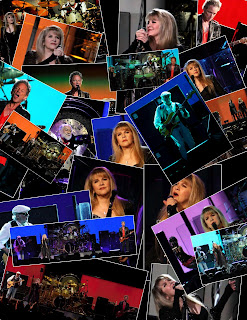 
The chemistry of former lovers who have reconciled — but realize things never can be the same — and the human drama that goes on with being close-quartered colleagues, or in this case, professional musicians, can be seen by all the world on Fleetwood Mac’s stage.

The band, founded by drummer Mick Fleetwood in the late 1960s, has evolved over the years, and its most prominent lineup, minus keyboardist/singer Christine McVie, played a 23-song set that lasted two hours and 30 minutes Thursday night at the Bank Atlantic Center in Fort Lauderdale.

Singer and “welsh witch” Stevie Nicks, guitarist and vocalist Lindsey Buckingham — the onetime couple — played off one another and at times sang to one another throughout the show.

Even those sitting in the upper reaches of the 20,000-seat — and almost full — arena could see, on the massive screens above each side of the stage, the expressions of remorse and reconciliation on the faces of Nicks and Buckingham as they played the ballad “Sara.”

Nicks’ singing and Buckingham’s melodic guitar playing were supported by the thunderous rhythm section of Fleetwood on drums and John McVie on the bass guitar.

“Every time we get together, we sit in rehearsal and try to make each return a little different,” said Buckingham, who turns 60 on Oct. 3. He did not look or play like his age. “This time, we said, ‘Let’s just go out there and have some fun.’”

And so they did.

Fleetwood, approaching his 62nd birthday on June 24, looks like Santa Claus. Except he stands a few inches taller — he’s 6-foot-6 — and wore black, not red.

Also unlike St. Nick, Fleetwood sports a silver pony tail and has eyes that bug out of his head.

And he sure can play the drums.

Pounding on the drums the entire night, Fleetwood finally had his chance for a solo.

After ending the 20-song set with “Stand Back,” and “Go Your Own Way,” most of the crowd did not go anywhere. They stuck around for the encore.

Toward the end of “World Turning,” the rest of the band, which included five supporting musicians, left the stage, leaving it to Fleetwood.

And the band didn’t. They did one more song during a second encore, concluding the show with “Silver Springs.”

Fleetwood Mac opened with “Monday Morning” and “The Chain.”

Other highlights included “Gypsy,” “Rhiannon,” “Gold Dust Woman” — during which Nicks’ donned a gold-colored scarf — and this reviewer’s personal favorite, the bluesy “I’m So Afraid.”
Nickslive at Friday, April 24, 2009
Share