Mac's still got the knack
TampaBay.com

TAMPA –- When Christine McVie ditched Fleetwood Mac in 1998, the piano-playing songbird took with her any semblance of levity that existed in the bed-hopping, turmoil-tossing band. She made loving fun; the rest of ’em made loving sound like a knife fight. 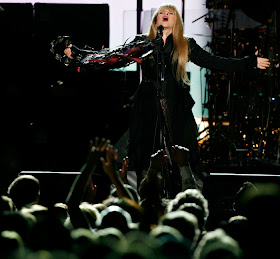 "As many of you know, Fleetwood Mac has had a complex and convoluted emotional history," Buckingham told the tidy, intense crowd of 10,008 fans. But for this tour, he added, they "just wanted to go out and have fun."

Fun is a relative term when most of your shattered-sunset songs are about how much you once despised the person next to you. For a good part of five decades, the Mac has been dysfunctionally functional. Even though all but one member is now in their 60s, those crazy kids are still working out their junk onstage. That said, they're also really good at their jobs. FULL REVIEW