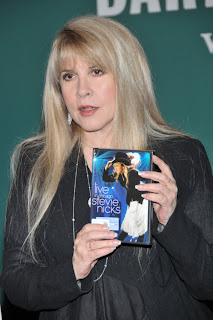 Night of the one and only Stevie
Stevie Nicks celebrates new solo album, Fleetwood Mac tour, and the gay fans who spawned the ‘Night of a Thousand Stevies’

More than three decades into her musical career, Stevie Nicks has charted dozens of hits, sold millions of albums, been dubbed “the queen of rock and roll” and even spawned her own drag queen tribute show.
But the singer-songwriter who helped make the band Fleetwood Mac famous with such hits as “Landslide” and “Rhiannon” isn’t resting on her laurels. Last month, Nicks released a solo DVD, “Live in Chicago,” with a companion CD, “The Soundstage Sessions” (Reprise/Warner Brothers) just as Fleetwood Mac launched its “Unleashed” greatest hits tour, which brings the iconic band to Atlanta’s Philips Arena on Tuesday.
SoVo spoke with Nicks in late March, on the day before “The Soundstage Sessions” was set for release. The 17-song DVD and the 10-track CD are bound to elate Nicks’ legion of fans, who will delight in her performances of beloved originals including “Landslide,” “Stand Back,” “If Anyone Falls in Love” and “Sara,” as well as renditions of songs by Dave Matthews, Bonnie Raitt, Tom Petty and Led Zeppelin.
SoVo: For your first filmed and recorded live show in nearly 25 years, what was it about your performance on the Chicago PBS series “Soundstage” that led you to want to release it as the “Live in Chicago” DVD?
Stevie Nicks: Well, what happened was in 2005, we got an offer to do four shows at Celine Dion’s major big theater, the Colosseum at Caesar’s [Palace]. I was in Maui and I thought I was going to have another month off and I got a call from my manager and he said, “I need you to come in and see Celine on this stage because she leaves after the show tonight and Elton [John] comes in tomorrow. So you could actually see Celine and Elton in two days and decide whether or not you’d like to do this because they’ve offered you four shows. And getting your foot in the door to play Vegas once in a while is not a bad thing.” 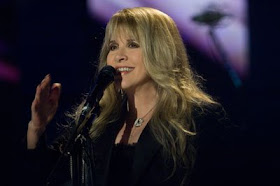 Not a bad thing, at all.
So I’m like sorry, I’m on my Rhiannon-quest here in Maui, so I don’t think I’ll be able to do that. And he goes, “I’ll see you Tuesday.” So, off I went. Waddy (Wachtel), my guitar player and I walked in. We’re sitting there and we watched Celine and then we watched Elton, and we’re like, “Oh, my God, we can’t do this!” You have to build a world here. This is a massive IMAX theater and the screens are a hundred feet tall. You can’t just take your little rock band in there.
We’re like, “Can we do this?” Elton filmed everything he ever did and Celine has Cirque du Soleil. What do we have? ...
We got this artist, Sulamith Wülfing, a German artist, my favorite, she died in 1989, but we got permission to use some of her drawings. So we mixed Sulamith’s drawings, my drawings, all the film footage, pictures, photographs, everything we could find, gave them to our lighting and stage guy and said, “OK, here it is. Go for it, work it out, fix it, put it together. Build a world.” He said, “OK!” That’s what we did.
It sounds amazing.
We went in there with a world. We did those four shows and they were great. Everybody really loved it and I loved it. Then it was like, “OK, we’re started now.” Between then and August of 2007, we toured with that show, obviously pared down a little bit...
At the end of the tour in August 2007, I’m sitting in my living room and I’m thinking to myself, “Once again, this show’s not going to be filmed.” So I called my manager and said, “You’ve got to make some calls. Or you’re soon going to be my ex-friend. Because this show is perfect. It’sabout as perfect as I can get. I’ve worked so hard on this thing since the four shows in Vegas two years ago, that I can’t move on until we film this show. It’s really not fair to me to not film this.” 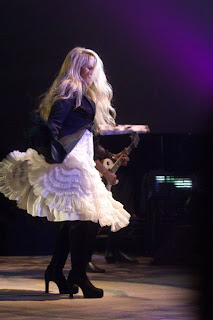 Did he make the calls?
He did. And he called back and said that Joe Thomas from PBS was very interested in doing it. … This was August, and we went on the first of October to Chicago, rehearsed for three weeks, and filmed it on Oct. 27. We came back to Chicago on Feb. 6 and stayed all of February and all of March and worked six days a week, eight hours a day and just hovered...
They let us be as involved as we wanted to be, which was great because we wanted to be involved.
That’s good to hear.
We left at the end of March [2008] and then they started putting it together, and that takes a couple of months. It was supposed to be out at the end of summer, but something happened and I don’t even remember what it was. They moved the date to late October. Then everybody realized — “Do we really want to put Stevie up against Barack Obama and John McCain?” That was a big no. They [also] didn’t really want to put it out when we were in rehearsal for Fleetwood Mac.
So because Lindsey (Buckingham) is taking a break right now... we gave him that two weeks and Warner Brothers and PBS said, “Let’s put it out then. Because then Stevie can do some press, she’ll be out on the road. She didn’t want the ski vacation anyway.” I’m just as happy to work. That’s how it got to here. Now you know!
The songs on the companion CD “The Soundstage Sessions” are cleaned up, in that the audience response to the songs was edited out. Why did you choose to go that route?
I said, “Let’s try to make this into a little album. Let’s pull the 10 most unfamiliar songs. Let’s take the Fleetwood Mac songs out and let’s put in “If Anyone Falls,” “Sorcerer,” the Dave Matthews song, the Bonnie Raitt song. Let’s put the unfamiliar things from the show [on the disc] and let’s take the applause off and let’s go to Nashville and redo some vocals and add some strings and make this a distinctly different piece of work that can go out, along with this DVD. … 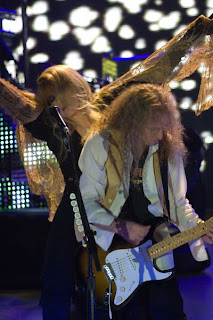 You’re going to have the version of “Landslide” on the CD that didn’t go into the show, which is a really spectacularly special “Landslide” because it was really a moment for me where I decided at that point I was going to have to say goodbye to my dad. It’s a very emotional “Landslide” which is not on anything else. From that moment onward, I had made my peace with my father going.
“Landslide,” which is included on both the CD and DVD, is a song of yours that has been covered by Dixie Chicks, Smashing Pumpkins, and most recently by Ann Hampton Callaway, who performs it on her new CD. How do you feel when you hear other people’s interpretations of that song?
I love it when people actually take it upon themselves to interpret something. It’s no different, really, then me trying to interpret “Crash Into Me” by Dave Matthews. Who would have ever thought that I would have done that? So who would ever think that people would try to do “Landslide.” Because mostly people would be like, “Oh, that’s a Stevie Nicks song, I can’t do that.” And the fact that somebody is brave enough to do that, I think is great!
Every time somebody does “Landslide,” it brings it to that generation of listeners. It just takes my music and spreads it out over the world now. I’m always thrilled.
Your songs “Edge of Seventeen” and “Gypsy” inspired the gay coming of age movies “Edge of Seventeen” and “Gypsy 83.” Is a gay following something that you have always been aware of?
Well, I’ve not always been aware of it. But I became aware of it with Night of a Thousand Stevies. And I am so thrilled. I’m thrilled! Because I want my music to mean something to everybody. I think that every song that I write can be dealt with for whoever you are. When you hear one of my songs, it is about you.
Only lately have I started to explain the real stories behind the songs, because I don’t want people to, when they think of “Landslide,” always think of Stevie sitting in Colorado. I want you to think of what it means to you. I want you to think of why it touched you.
I am first and foremost a writer. I am thrilled and honored that the gay community backs my music. I always kid everybody that one day, all you Night of a Thousand Stevies people, one day I’ll be there, in complete dress, and you won’t know it. I’ll be hulking around somewhere, standing behind you, so be careful what you say, because I could be standing next to you at any moment.
Nickslive at Friday, April 24, 2009
Share