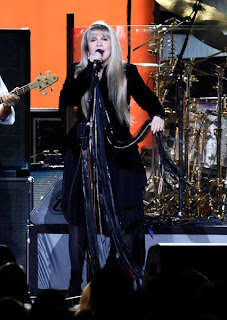 
STEVIE NICKS is the consummate tease. Fanning out her arms, which are veiled, as always, in chiffon, she seems about to fold her audience into an embrace. Yet when she turns away, raising those arms in a priestesslike gesture, that fabric acts as a curtain, shielding her from prying eyes.

Her audience last month at Madison Square Garden, where Ms. Nicks sang with Fleetwood Mac, was clearly seduced by her come-hither/keep-back performance. Aging hippies and youthful rockers swayed and twirled in the aisles, their faces upturned to watch her shake her tambourine.

Her stylistic persona is as rock steady as her sound. Part healer, part sorceress, at 60 she is still working the gossamer tunics and shawls that have influenced two generations of Stevie acolytes, and given her performances the feel of a Wiccan ritual. Now, as if timed to the vernal equinox, Ms. Nicks has resurfaced with two new DVDs and a three-month concert tour. As might be expected, troupes of leather-and-lace-clad Stevie clones are popping up like crocuses.

They love her music, of course. “But time makes you bolder/Children get older/I’m getting older, too,” lines from the ballad “Landslide,” which she wrote at 26, can bring tears to their eyes. But they are besotted with Ms. Nicks herself. Never mind that the rock star is no sylph. She is the anti-Madonna — fragile and ethereal — and as constant as the tides.

“She does her own, thing, always has done,” said Lily Donaldson, the celebrity model who attended the concert last month. “I love her music and her look, that whole flowing thing.”

Anna Sui, who dedicated an entire collection to Ms. Nicks in the late ’90s and turns out Stevie-inspired handkerchief hems almost every season, admires her consistency. “She’s the iconic California woman,” Ms. Sui observed. “Everyone has their version of her.”

These days Ms. Nicks is the inspiration for Web sites like gypsymoon.com, which offers Nicks-style top hats and shawls; and enchantedmirror.com, which sells tambourines, fringed shawls and a musky fragrance in homage to the singer. In February, Jill Stuart paraded Nicksian feathers, leather and lace on her fashion runway. 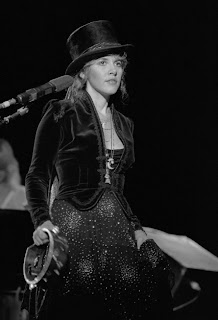 Variations on her costumes were precursors, Ms. Nicks will tell you, of “that grungy girl who wears the little ballerina dresses and big buccaneer boots.”

She will also tell you that the West Coast Ophelia look, all ruffles and belled sleeves, is the product of canny self-packaging.

“I needed a uniform,” she recalled, one that would counteract the stage fright she encountered in the mid-’70s, when she first began touring with Fleetwood Mac. At the time, her brief to Margi Kent, who still designs much of her wardrobe, was to create “something urchinlike out of ‘Great Expectations’ or ‘A Tale of Two Cities,’ ” a chiffonlike, raggedy skirt that would still look beautiful with black velvet platform boots.

“We came up with the outfit: a Jantzen leotard, a little chiffon wrap blouse, a couple of little short jackets, two skirts and boots,” Ms. Nicks said as she reminisced in her suite at the Waldorf Towers last week. “That gave us our edge.”

And an effective disguise. “I’ll be very, very sexy under 18 pounds of chiffon and lace and velvet,” Ms. Nicks promised herself as a teenager. “And nobody will know who I really am.” 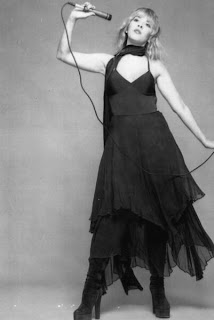 Today she remains a woman under wraps, her legend as carefully tended as her wardrobe, which she stores in her home in Los Angeles. That legend encompasses the shaky vicissitudes of her romantic life — fans still speculate about the nature of her relationship with Lindsey Buckingham, Fleetwood Mac’s guitarist and her long-ago lover — and her risen-from-the-ashes saga of drug abuse and rehabilitation.

She is slow to detail the ravages of cocaine, which caused her voice to falter and her weight to fluctuate wildly over the years. But she does vow heatedly, “I will never do another line.”

Wed briefly in 1983 to Kim Anderson, the widower of a close friend, she has never remarried. “I didn’t want to be held down by a relationship,” she said, elaborating only that she was simply not equipped for the responsibilities of family life.

Her assiduously cultivated mysteriousness helps to keep her alive in the minds of fans. Yet at times she can appear guileless. Leaning in confidentially, she bemoaned the state of her arms. “They’ll never be what they were.” To tone them, she flexed a few times too many on her Power Plate machine, tearing a ligament. “When I’m pulling up my tights, I’m like dying,” she said. 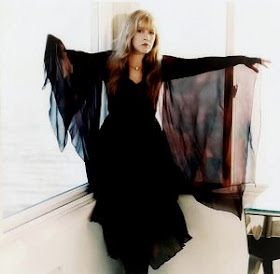 She was limber enough, though, to lay out on the carpet three variations of her favorite stage turnout: a cutaway jacket, a ruched and ruffled dress and chunky boots. Missing was the airy shawl that is part of her concert uniform.

“A shawl is a great prop,” said the star, who is 5-foot-1. “It makes for big gestures.” Spreading her arms and whirling like a gyroscope, she added, “If you want to be seen at the back of that arena, you have to have very big movements.”

Her reach extends to Hollywood as well. Lindsay Lohan hopes to buy the rights to her life story and to play her on film. Unmoved, Ms. Nicks responded: “Over my dead body. She needs to stop doing drugs and get a grip. Then maybe we’ll talk.”

That candor endears her to fans, who evidently equate it with authenticity. “She’s not a trend or a fad,” said Nicholas Kalinoski, 30, the creative director of a fashion house in New York. “She’s an original, and people follow an original.”

Standing in line behind him at Barnes & Noble in Union Square last week, Johanna Ramos, 21, waited stoically for Ms. Nicks to sign her DVDs, “Live in Chicago” and “The Soundstage Sessions.” “She looks like a sorceress,” Ms. Ramos said, “like someone powerful who owns the stage.”

Indeed, with her back to the audience, Ms. Nicks projects the fervor of a tent revivalist. “There are times when she stands completely still, and then she’ll just put one hand up,” said Chi Chi Valenti, the founder of Night of a Thousand Stevies, an annual Nicks-inspired costume bash. “Especially with the backlighting, she almost looks like a religious statue.”

Some 1,000 people lined up to greet Ms. Nicks in Union Square, bringing offerings of handmade greeting cards and amulets. There were boys in Nicksian top hats and urbane looking women in black chiffon and crescent moon pendants.

“You are my mentor and my inspiration, and I’ve loved you all my life,” one long-haired admirer in her 40s said. Ms. Nicks took her hand. Another, in her 20s, glided forward in a wheelchair, and Ms. Nicks squeezed hers as well, just as she did when a girl, 17, told her that she had given her the strength to stop using cocaine.

Looking on, Liz Rosenberg, Ms. Nicks’s longtime publicist, was having none of it. “Stevie is the new kabbalah,” she joked. Then she urged her to step up the pace.