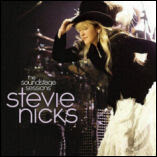 Stevie Nicks latest release is remarkable for one particular track.
How many times have Fleetwood Mac put out an album including the beautifully crafted song Landslide? How many ways can it be recorded?
It was originally penned by Nicks for the bands eponymous album, the first on which she and then partner Lindsay Buckingham appeared, back in 1975.
After the personal ructions of Rumours and the studio trials of Tusk, when the band recorded their next album, Fleetwood Mac Live, on their 1980 world tour, there was a version which carried little of the weight and charm of the original.
The haunting feel of the studio version had not been translated to the stage.
As the band moved on through its many incarnations from the mid-80s to the mid-90s, without the presence of Buckingham, the track was a live staple.
But it was with the reunion of the Fleetwood/McVie/McVie/ Buckingham/Nicks line-up in 1997 for the intimate live album The Dance that the song found new life.
With an emotional performance of the song followed by the words 'Thank you Lindsay,' and 'Thank you Stevie' all the rifts in the act's most successful line-up seemed to have been publicly healed.
For their 2004 tour the feeling was even stronger and the presence of the track on the Live in Boston DVD and CD is a true highlight.
Now the band are touring stateside and performing the track again.
But just when you thought it couldn't get any better... out comes Nicks' new album, The Soundstage Sessions, with a remarkable studio recording.
The difference in the vocal are clear and the tone of the guitar is miles away from Buckingham's original or his recent live performances.
But the genius lies in Nicks' decision to bring an orchestra in half way through the song - and have the guitar break played by a violin. Very brave and very clever.
There is much more to enjoy on the album including excellent new versions of Stand Back and Sara, the Bonnie Raitt track Circle Dance and Dave Matthews' Crash Into Me.
The accompanying DVD also contains a reworking of Rhiannon, the other best-loved track from the Fleetwood Mac album, and her other signature tunes, Dreams and Gold Dust Woman.
But this is a disc that is genuinely worth buying for one song - a track that tells the story of Nicks' life and times in Fleetwood Mac.
The Soundstage Sessions album and Live In Chicago DVD are out now on Reprise Records.
Nickslive at Wednesday, April 15, 2009
Share