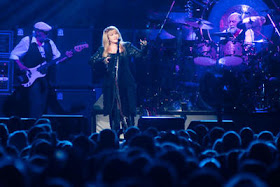 
If someone had told us when we were 15 that we'd: a) be going to see Fleetwood Mac--a band who was adult contemporary and soft even when they rocked--voluntarily; and b) be pretty excited about it--we'd have probably laughed. We'd love nothing more than to report that band--with all members hovering between the ages of 59 and 63--blew us away, sounded phenomenal and rocked with a burning passion that flew in the face of their age. But the show sounded old, tired and phoned-in. We were bummed.

Fleetwood Mac are one of those bands that for many of our generation elicit memories of excruciatingly long car rides to which they were the soundtrack. However, the undeniable quality of the songwriting on the band's three seminal records Fleetwood Mac, Rumors and Tusk inevitably led us to grow up and appreciate how great they are. The Sommet Center show made us feel like we were 15 again, bored and squirming in our seats. 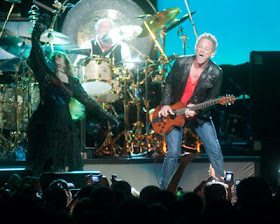 We knew we were in trouble from the start, when not a single person around us stood for the opening song, "Monday Morning." Given the demographic of the audience--just think Belle Meade Country Club--we were expecting a tame crowd with a proclivity towards sitting. But we at least expected that all would rise for the opening song.

Next up was "The Chain." Fuck yeah! Or so we thought. Midway through the Rumors anthem we found ourselves bored. This became the case with many of the hits--which the band's set was chock full of, this being a "greatest hits" tour and all. From "Dreams" to "Rhiannon," "Gold Dust Woman" to "Tusk," nearly every one one of the band's indelible classics in what Stevie Nicks called their "myriad of treasure trove songs" underwhelmed, lacking the potency of their original recordings. "Tusk" was going fine until the whole USC marching band section was piped in by either a sequencer or a synthesizer, making it seem instantly cheesy. Where are Heypenny when you need 'em?

The biggest problem was Stevie Nicks. Her voice sounded fatigued, pitchy and at some points just plain bad. Most of the songs were dropped down a key or two and she would still take many of the lower harmonies, which contributed to the songs' losing a lot of their power. Couple this with her uncomfortable "mystic" fabric twirling and you have a performance that bordered on goat-like parody throughout the duration of the show. She seems like a real nice lady and all, it's just that people are paying upwards of $150 a ticket for this show and, frankly, deserved better for that price. 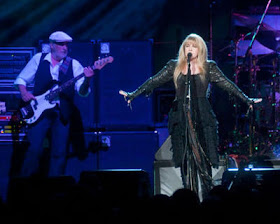 Lindsay Buckingham, on the other hand, was mostly great. His voice, by and large, has held up, and he had more than his share of blistering guitar solos. His talents were not enough to save the show however, and he too has a presence that borders on parody, fawning over himself and playing up the whole star-crossed lovers schtick in a way that makes him come off as weirdly self-absorbed. Even for a rock star.

Unfortunately Christine McVie, having retired from touring, was absent from the proceedings and the version of "Say You Love Me" they played made us long for her presence. Her ex-husband, bassist John McVie held down a solid groove--no complaints about him--while Mick Fleetwood was mostly awesome, both as a hammy performer and as player. His greatest transgression was a drum solo during the encore that sounded frighteningly similar to Iron Butterfly's "Inagaddadivida."

The night wasn't without at least a few moments, as songs like "Second Hand News," "Go Your Own Way" and especially "Landslide" still retained some of their power. But the show never really got to the point of kicking ass. Waiting for those few and far between moments kept us there for the entire two-and-a-half hours, but, unsatisfied at show's end, we headed over to the Features show at Mercy Lounge for something that rocks!
Nickslive at Monday, June 22, 2009
Share