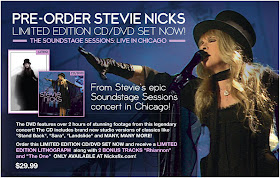 ORDER STEVIE NICKS LIMITED EDITION CD/DVD SET
NOW BEFORE IT'S TO LATE!
The Nickfix, Stevie's official Website is the only place where you can order this very limited edition package.
Act now as only 200 copies remain! 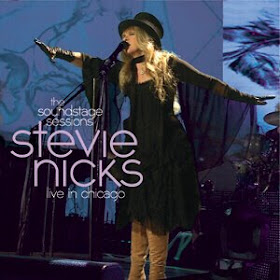 The DVD features over 2 hours of stunning footage from this legendary concert! The CD includes brand new studio versions of classics like "Stand Back", "Sara", "Landslide" and many, many more!
This limited edition CD/DVD set sports a unique cover and also includes a limited edition lithograph of an unreleased photo that you can't get anywhere else!
Also included with your purchase are two bonus "instant gratification" downloads of "Rhiannon" and "The One" - two tracks that don't appear on the CD.
Order for $29.99 from the Warner Brothers Store.
For residence outside the USA - Warner Brothers will accept Paypal for payment.
WATCH THE WARNER BROS. PROMO VIDEO