Fleetwood Mac's 10 month, four continent tour that began in Oct. 1979 and ended in September 1980 is documented in this two-recorded live set. Recorded in various locales, the LP spans some of the best of the group's material, all delivered in crisp fashion. Much of the material deviates from their studio counterparts in that there is spontaneous interaction among members. While such Mac standards as "Rhiannon," "Go Your Own Way," "Over My Head" and "Don't Stop" are included, there are also less obvious cuts selected such as "Fireflies" and Brian Wilson's "The Farmer's Daughter." The sound quality is extraordinary and the packaging exceptional making it a valid collection by one of the world's most popular groups. Best cuts:"Go Your Own Way," "The Farmer's Daughter," "Sara," "Monday Morning," "Landslide," "One More Night." (Billboard Magazine, 12/20/80)
"Live" debuted at no.49 on Billboard Magazines Top LP's and Tape Chart December 27, 1980 and peaked at no.14 spending 18 weeks on the chart. 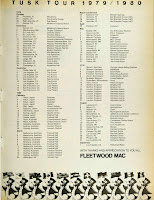