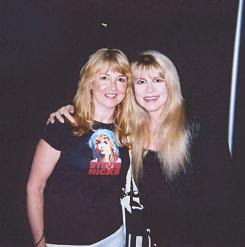 LORI A. MAYNE
The Journal Pioneer

SUMMERSIDE – Pauline Doucette tried to bring back more than memories when she met her Fleetwood Mac idols.

She tried to bring back the band.

Doucette, 44, had the chance to chat with Stevie Nicks backstage at the band’s recent concert in Edmonton. Doucette wasted no time after learning Nicks needed some down time.

“If you want a nice, quiet place where there’s not a lot of traffic, why don’t you come to P.E.I.?” Doucette suggested. “Everybody loves Fleetwood Mac, but we’ll give you your space.”

The former Summerside resident, who now lives in Chelton, gained the name “Black Cloud Polly” for notorious bad luck. That unfortunate streak continued when she travelled to Edmonton for the Fleetwood Mac concert in May and it was postponed. Doucette, a single mom on disability pension, saved for months to cover the flight.

Hearing her story, the band promised an unforgettable concert experience.

An Alberta woman had donated air miles for Doucette’s flight this time. So the band ensured Doucette had luxury hotel, special seating, memorabilia and time with both Mick Fleetwood and Nicks.

Doucette and friend Shannon “Sugar” Doyle met Fleetwood on stage before the show. Doucette marveled at the drummer’s height and the casual way he sat on a stool, chatting and joking about insurance on his hands.

“He kissed me on the cheek twice!”

Doyle and Doucette got ushered backstage after the show to meet Nicks, who greeted Doucette with a big hug.

“She was exactly what I expected her to be.”

When Doucette asked for an autograph for her daughter, Jessica, Nicks noted she had a niece by the same name.

“I know that already,” confessed the die-hard fan.

Nicks held Doucette’s shaking hands as they chatted and said she was glad Doucette returned for the show.

Doyle teared up seeing Doucette fulfill her dream because she’s always the type to worry about others.

“This trip was all about her,” Doyle said.

Now back on the Island, Doucette has new nicknames.

Friends ask if they should call her Silver Lining Polly.

“A few of them call me Gold Dust Woman,” Doucette quipped.
Nickslive at Sunday, July 19, 2009
Share