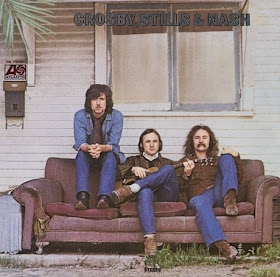 CROSBY, STILLS AND NASH
Not only did Fleetwood Mac frontwoman Stevie Nicks dish to me in our July issue about the record that changed her life, Joni Mitchell’s Court and Spark, in the interview she also revealed her first music crush: Crosby, Stills and Nash. “If you can’t fall in love with those three guys, you can’t fall in love,” she said. Since then, I’ve been obsessed with CSN’s 1969 self-titled debut—not only because their folky tunes make me want to revisit denim-on-denim (see Graham Nash on the album cover, far left), but their groovy harmonies (download “Suite: Judy Blue Eyes”) eerily remind me of Fleet Foxes, one of my favorite modern-day bands. For CSN newbies like me, Crosby, Stills and Nash will be available in vinyl from Rhino this fall. Something tells me Stevie’s still got her original copy.
—Julie Vadnal, Editorial Assistant
Fashion.Elle.com
Nickslive at Wednesday, July 15, 2009
Share