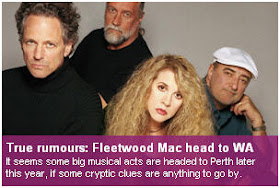 Daile Pepper
WAtoday.com.au
August 18, 2009 - 10:24AM
The rumoured arrival of Fleetwood Mac on West Australian shores appears to be true, with the band believed to be playing at Member's Equity Stadium on December 11 and 12.
The band are gearing up for their Unleashed greatest hits tour, with fans hoping a New Zealand and Australian leg will be confirmed.
It seems some more big musical acts could also be headed to Perth later this year - that's if some cryptic clues delivered by the management of Member's Equity Stadium at a recent event are anything to go by.
Allia Venue Management chief executive officer Peter Bauchop addressed a crowd of sports representatives assembled for a night of celebration at the venue hinting at big things to come. And the events had nothing to do with sport.
"I don't want to spread any rumours, and I would much rather stay alive, than take the glory and the consequences," he said.
He told the crowd the months of November and December would be huge for the arena, but insisted that he was only joking around and could not confirm anything.
But the guessing games started with hopes that his reference to "rumours" referred to Fleetwood Mac's legendary album,"stay alive" to Pearl Jam's hit Alive and "take the glory" to Badly Drawn Boy.
Pearl Jam is playing at the stadium on November 14. Tickets are on sale now.
There is now a list of major acts heading for the city, including Beyonce, Marilyn Manson, Britney Spears, Greenday and ACDC.
Nickslive at Monday, August 17, 2009
Share