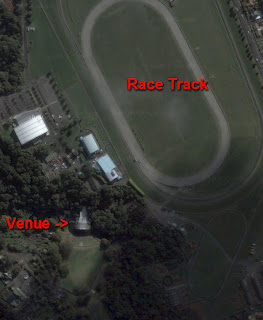 Accommodation for Fleetwood Mac's December 20 concert is almost sold out in New Plymouth, with out-of-towners being referred to Stratford and Hawera for beds.
But those keen on the outdoors will be able to camp a mere two-minute walk from the TSB Bowl of Brooklands where the concert is being held.
The New Plymouth District Council and Taranaki Arts Festival Trust have opened Pukekura Raceway up for camping. The racecourse has room for 3000 people.
Taft chief executive Suzanne Porter says the campsite will be set up the same as it is for Womad.
"If you have come to the Womad campsite, you will know what it's about," she says.
"We have good showers and toilets it's not grungy."
Camping vouchers are available from Ticketmaster today.
For Friday and Saturday nights, the cost is $40 per person and for Sunday night, it's $20 per person.
Many wanting a campsite at the racecourse have already registered at New Plymouth i-SITE Visitor Information Centre for their tickets.
The Saturday, December 19, Fleetwood Mac concert sold out within 10 minutes on Wednesday.
A second concert the next night was announced shortly afterwards, with tickets selling rapidly.
It is likely about 36,000 people will pass through the TSB Bowl of Brooklands gates in a 24-hour period.
Taranaki Motel Association president Deborah Tawa says most New Plymouth motels are fully booked for the Sunday show.
Continue to full article

Fleetwood Mac fever hit overdrive yesterday as tickets for the international group's New Plymouth concert on December 19 sold out within minutes.
Promoters immediately announced a second concert for December 20, which means 36,000 people will likely pass through the TSB Bowl of Brooklands gates in a 24-hour period.
Thousands of tickets for the second Sunday show sold within half an hour.
New Plymouth District Council manager of business developments and events Garry Sharpe-Young said organisers anticipated tickets would sell fast.
"The promoter was trying to get hold of all the band managers to see about a second show and it was all very last minute and just in the nick of time," Mr Sharpe-Young said.
"The tickets for the second show are going very well and fast. It's just fantastic for Taranaki and it's great for the venue."
Taranaki Motel Association president Deborah Tawa says there is no motel accommodation for December 19 left in the region.
"We have been frantic," Mrs Tawa said yesterday.
"Accommodation for the first concert is well and truly gone, we filled up in five days two weeks ago."
There are still rooms available for the Sunday concert on December 20 but they are running out rapidly.
Continue to full article
Nickslive at Thursday, September 10, 2009
Share