Michael Usher talks about interviewing the
members of Fleetwood Mac 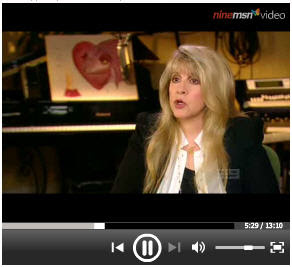 A nice plate of sandwiches, a smooth glass of red wine and endless offers of fresh bottled water.

Sounds like a pleasant brunch, a casual weekend get together, but certainly not the hospitality I'd expected from three musicians whose sex drugs and Rock'n'Roll lifestyle in the 1970's made them legends.

I'm talking about Fleetwood Mac. Earlier this week, I returned from Los Angles and Hawaii where I caught up with Stevie Nicks, Mick Fleetwood and Lindsey Buckingham.

Now to understand the band's history and music, you first have to get your head around these three members of the band. Their lives have been a rollercoaster. Stevie and Lindsay were lovers and broke up, and ever since have had a love-hate relationship. Stevie and Mick had a lengthy affair - that started in Australia by the way - and today call each other soul-mates. Stevie and Mick also happened to have spent most of the late 70's and 80's hooked not only on each other but drugs, especially cocaine. "Booze, cocaine, dope, booze, cocaine, dope," Mick told me when he was describing that time of his life.

These days, their lives are very different. They're clean, loving their music again and, after 34 years, liking each other enough to tour again.

In fact, for all their personal turmoil over the past few decades, they've always come together for the music. They may not have been speaking with each other at times, but what they had to say they said in song. And luckily for us, that meant great classics that made Fleetwood Mac one of the biggest-selling, most popular bands of all time.

Lindsey Buckingham was our first interview at his beautiful home in L.A. He has his own recording studio beneath his garage so we set up there for the interview. Lindsay's about to turn 60 next month but married for the first time 10 years ago and has three young children. A few of them popped their head in on the interview after getting home form school. You can tell Lindsey is loving being a dad, as much as he loves playing his music. He rightly has been hailed as the creative force behind Fleetwood Mac, especially the 'Tusk' and 'Tango in the Night' albums.

After the interview, Lindsey was good enough to pull out one of his many guitars and play us two songs, 'Never Going Back Again' and 'Big Love". He plays beautifully and, as many of his fans know, has enjoyed a successful solo career away from Fleetwood Mac. And here's some trivia – you remember that movie "National Lampoon's Vacation" with Chevy Chase? Well Lindsey wrote and performed the film's catchy theme song "Holiday Road".

Our next interview was a little way down the road in an equally nice area of L.A., at Stevie Nicks' home. And what a host she was, an open kitchen, fresh sandwiches, anything you wanted. Lucky there were supplies, because this lady loves to talk, and so do I. Our main interview ran almost one hour overtime and nothing was off limits.

Her 10-year cocaine binge, her love life with Lindsey and Mick, the music, her solo career – the lot – we talked about it all. Stevie likes to be open and candid because she hopes her life might be a lesson to some of the Hollywood starlets making a mess of their private lives at the moment. This woman has been through it all, survived, is still singing and loving life. And Stevie can't wait to tour Australia.

Next stop was the Hawaiian island of Maui that Mick Fleetwood has called home for a few years now. He has a magnificent lodge half way up a mountainside with sweeping views of the surf below. And here he can go hell for leather on the drums and there isn't a neighbour within hearing range who can complain. And Mick did just that for us. He hit the kit -belting away with all the power and emotion that helped him form this legendary band way back in the 60's.

Fleetwood Mac has reinvented itself a few times over, but Mick has always been there steering it through, finding new members and convincing the old ones to come back. And, in between gigs with Mac, he has a blues band that tours the world.

Mick like Lindsey loved and lost Stevie Nicks, and late in life also married and started again with a new family and young children.

Like Stevie, Mick was incredibly gracious with his time. We spent hours with him as he told Fleetwood Mac's turbulent tale and explained the often tortured inspiration behind the band's music. These days, Mick doesn't touch drugs but he does have a vineyard in California, so to help lubricate the interview he had a bottle of his favourite Pinot Noir within arm's reach.

It was a great experience talking with these music legends. The drummer, the guitarist and their Queen of Rock'n'Roll. They've got a story to tell and don't mind telling it. They were refreshingly honest, and generous. And without a single new song to plug, they're just enjoying being back together, touring the world, and performing the songs that made them superstars.