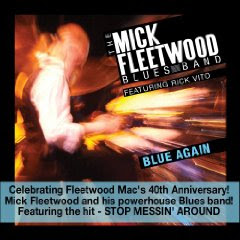 In 2008, in the midst of Fleetwood Mac’s 40th anniversary, drummer Mick Fleetwood decided that it was time to revisit the blues years and took to the road with formidable blues line-up, fronted by onetime Fleetwood Mac guitarist/singer Rick Vito and accompanied by bassist Lenny Castellanos & keyboardist Mark Johnstone. The mostly live album BLUE AGAIN was recorded in February of 2008 at the Sheldon Concert Hall in St. Lois, MO and features an even blend of Peter Green classics and bluesy Rick Vito originals; with a blistering encore of Elmore James’ Shake Your Moneymaker. In the CD’s liner notes Fleetwood explains, “Over my career I've been called a pop star and a rock star, yet in my inner heart, I will always be part bluesman. On my journey from blues to a life of rock n roll, I've always remembered where I started.”
Also, the word on the street is that a companion DVD of this 2008 performance will be released this fall.
Read the full CD Review
Nickslive at Tuesday, September 08, 2009
Share