Diehards flying in from the US and Britain, on what is likely Fleetwood Mac's final concerts ever 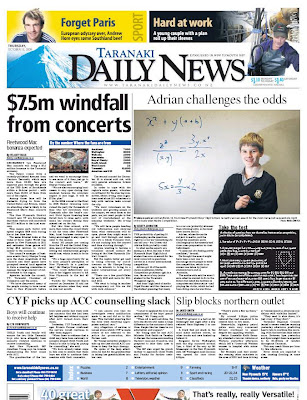 (Rather presumptuous of Taranaki Daily News to assume that the last two shows of Fleetwood Mac in New Zealand will be their last...Ever!)

The figure comes from a recently-published forecast from Venture Taranaki, which says more than 36,000 fans are expected pass through the gates of the TSB Bowl of Brooklands within a 24-hour period – with more than 25,000 of them from out of the region.

Among those fans will be diehards flying in from the United States and Britain, intent on attending what is likely to be Fleetwood Mac's final concerts ever.

The New Plymouth District Council and VT are forecasting that these visitors will contribute the $7.5 million to the local economy.

This means each visitor will spend roughly $300 each during his or her time here.

The same forecast looks at the value of three rugby World Cup games in New Plymouth in 2011 and estimates those games will bring $5.2 million in visitor money to the economy.

The council's manager of business events Garry Sharpe-Young says the sheer magnitude of the concerts and their guests have prompted several local agencies to form a steering committee to manage the large amount of out-of-towners to the region.

Agencies include the council, VT, Taranaki Chamber of Commerce and the police.

"We have discovered many of the people coming in have never been to New Plymouth before and we want to encourage them to see more of it than just go to the concert and leave," Mr Sharpe-Young said.

"We are also encouraging businesses to stay open during that weekend because the economic impact is just huge. It will be $7.5m plus."

At the REM concert at the Bowl in 2005 Easter licensing laws ruined the party for thousands of fans who hit downtown New Plymouth after the band's concert. Strict liquor licensing laws forced bars to close early, with many bar owners feeling they missed out on the fun.

But this time around, with more than twice the crowd likely to hit the town after Fleetwood Mac, local business owners are being encouraged to stay open to cater to the masses.

About 100 people are coming from the US and the United Kingdom, many of them have been following the international group's world tour, which is said to be its last.

"It's a huge opportunity for us to alter people's perception of New Plymouth in a positive way," Mr Sharpe-Young said.

"You could definitively say this is the biggest concert to hit New Plymouth in the last 40 years."

Tickets for Fleetwood Mac's concert on December 19 sold out within minutes when they went on sale last month.

The second concert for December 20 is almost sold out, with only general admission tickets available.

In order to cope with the region's extra guests, volunteer co-ordinator for the steering committee, Moira Irving, says organisers need about 200 volunteers to help with various tasks around the city.

"We want volunteers on the walkway and greeting people at the airport, we want them at the park, we just want people to feel sort of overwhelmed at the amazing weekend," Ms Irving said.

"We will have people handing out information and showing them what restaurants will be open, places they might want to go and visit through and make sure it's a whole Taranaki visit, it's not rushing into the concert and then shooting through."

Anyone wanting to become a volunteer should contact Ms Irving at the New Plymouth District Council.

But the region better get used to being overrun by out-of-towners as Mr Sharpe-Young says he intends to bring in a major international act every year.

"We want to bring in another contemporary act like we did with Jack Johnson."

WHERE THE FANS ARE FROM