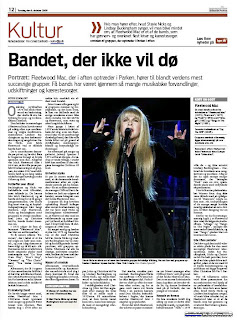 This article ran in the Denmark publicaton Jyllands-Posten on October 8th. This is the translated version.

Portrait: Fleetwood Mac, who appears tonight in the park are among the world's most successful groups. Few bands have been through so many musical transformations, replacements and boyfriend troubles.
Around New Year's Eve 1974 Mick Fleetwood took a decision that would impact strongly on pop and rock music history.

The British drummer of Fleetwood Mac had been on the lookout for new members and elected multiinstrumentalisten Lindsey Buckingham and the charismatic singer Stevie Nicks that Mick Fleetwood had by chance heard of.

The two Americans formed private couple and had for several years unsuccessfully tried to break through as a duo. Nevertheless, Mick Fleetwood in no doubt that they would fit perfectly with the relaunch of the Group since 1967 with varying success and a variety of replacements were done in blues and rock.

Buckingham and Nicks were astonished at the offer, but thanked yes. They liked Mick Fleetwood, and so they needed to get cash flow. It was soon apparent that the capital injection was much stronger than Fleetwood, Nicks and Buckingham and the group's other two members, John and Christine McVie, had dared dream of.

In 1975 they released five albums "Fleetwood Mac", which was one million Sellers.

Two years later came "Rumors", in the course of a year sold about ten million. paragraph. and which today is estimated to have sold up to 40 million. paragraph. This makes it one of the all time best selling plates ørehængere like "Go Your Own Way", "Do not Stop," "Dreams" and "The Chain" and "You Make Loving Fun".

The album, which was at the top of the U.S. album charts for six years, exhibited a band that in Mick Fleetwood and John McVie had a solid rhythm section with solid roots to the British blue rock.

They had both been with since Fleetwood Mac in 1960 broke through with singer and guitarist Peter Green as a star. However he did in 1970 after a series hits announced his resignation with the band.

Peter Greene would rid themselves of the group framework and obligations, and it came out that he was dissatisfied with the other musicians' abilities. Nevertheless, it was McVie and Fleetwood, who proved the most long lasting.

Several times during the 1970s the first half but it seemed as if Fleetwood Mac had an unusually weak band that would not keep out the decade because of strife, addictions and strange decisions.

For example, walked singer and guitarist Jeremy Spencer in 1971 out to shop - never to return. Instead he became a member of the religious movement Children Of God.

A few years later it ended with the then current band members after a grueling period ranged from one another - to see their former manager, Clifford Davis fabricate a completely new version of the band, later known as the fake Fleetwood Mac.

However, neither group received support among colleagues or success among fans karen, and it was only with Nicks and Buckingham's presence, to Fleetwood Mac with an inclusive and more popped sound was a viable format. At least until the late 1980s.

A highly visible and audible power from 1975 onwards was that of Christine McVie, Stevie Nicks and Lindsey Buckingham had three strong and diverse main characters, when the group performed. Furthermore, all three were talented, ambitious songwriters, which they each led evidence of "Rumors".

The album's overwhelming commercial and artistic success story, however, stood in sharp contrast to what was happening behind the facade of a band that otherwise looked like a dream: two couples, John and Christine McVie and Lindsey Buckingham and Stevie Nicks and Mick Fleetwood in a bundle of energy and a father-figure and leader.

The reality was Christine and John McVies marriage after many years of crisis, not to save the mid-1970s. On the minus list was that she had been unfaithful to him while he struggled with a longstanding alcohol abuse.

The strong, beautiful partnership Buckingham / Nicks was the mid-1970s no longer idyllic. The relationship was worn out after years of striving for success and to make matters worse, was Stevie Nicks at a time girlfriend with Don Henley, leader figure in the Eagles who could match Fleetwood Mac in sales and popularity.

Then there was Mick Fleetwood, in addition to fit the drums had been manager for Clifford Davis' exit because of the fake Fleetwood Mac. The major responsibilities prevented him not from living the wild life and the life stages of a relationship marked by adultery.

The five musicians met never stopped writing or recording music, and the double album "Tusk" in 1979 would they - and not least Lindsey Buckingham - show what they could as songwriters and musicians. Today there are as many tasters, who considers "Tusk" as a big, exciting record with successful experiments.

During his time could record company Warner Brothers. not be satisfied with that follow-up to "Rumors" sold around. five million. paragraph. Recording of the many songs as it cost a million. dollars, which back then was a fortune.

Thus, there was commercial logic in that Fleetwood Mac with the following studio album, "Mirage" and "Tango In The Night" went to see it more simply catchy, especially "Tango" album was a commercial success.

Out of several periods

It was also the so far last album from the most successful Fleetwood Macopstilling. Since then, Buckingham, Nicks and Christine McVie had periods when they saw a Mac-plate will be recorded without being helped to make the decisions, and the audience must look in vain for Christine McVie in the park.

Here the audience will no doubt be presented to the success story through a string of catchy hits. But if you hear what Stevie Nicks and Lindsey Buckingham sings, you will be reminded that Fleetwood Mac is one of the bands who have survived and most crises and boyfriend troubles.