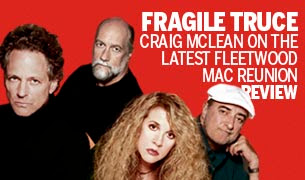 
IN THE airy, eyrie lounge at the top of the three-floor penthouse suite of one of New York's ritziest hotels, the Plaza in Manhattan, Stevie Nicks is thinking about the good times.

"The party that could be had up here would just be spectacular," she coos, gazing out over the rooftop terrace at the glorious views afforded by this, one of her longstanding favourite hotels. Her tiny dog Sulamith, named after a German artist and ever-present by the singer's side, whimpers her assent. Is Nicks saying that she never actually partied up here, even back in the glory days of '77, when her band released what would go on to be one of the biggest-selling albums of all time?

"No, no, I did not up here," she says, flicking the thick, swishy, blonde hair framing a wrinkle-free face that belies her 61 years and her onetime, longstanding enthusiasm for cocaine. "I don't think we ever came up here. It was probably winter. I think we partied downstairs."

Last night Fleetwood Mac played a great and rapturously received gig at Madison Square Gardens, show number 12 on a comeback-cum-Greatest Hits tour. It's the latest chapter in one of the all-time legendary rock'n'roll stories, that of a band with almost four decades of hits, splits, divorce, drug abuse, walk-outs and reunions behind them. Fleetwood Mac are still here (mostly – singer and keyboard player Christine McVie left in 1998; she now lives quietly in Kent), although these days there's a functional dysfunctionality to their operations. On the road these multi-millionaire veterans all stay in different hotels and, on the rare occasion they grant interviews, will only be interviewed separately (or in the case of bass player John McVie, not at all).

Naturally their live set draws heavily from Rumours, the band's landmark 1977 album. To date it has sold some 30 million copies, its timeless tunes and infamous lyrical backbone – the break-up of the songwriting couples within the band – appealing to a whole new generation.

At the end of the Madison Square Garden gig, Mick Fleetwood, six foot six and 62, had jumped down from behind his drumkit to take a bow. He was wearing the knickerbockers he's long favoured onstage, with pendulous decorative "testicles" dangling beneath his scrotum. Just as he did on the Rumours sleeve. Why does he wear those, still?

"The original ones were toilet chains," he chuckles. He's talking in another hotel uptown, his preferred Manhattan pied à terre, his English accent intact almost 40 years since he shipped his blues band over to Los Angeles and set about reinventing them in late 1974 by hiring hotshot Californian guitarist Lindsey Buckingham and his hippy-chick songwriter girlfriend Nicks. "I had them hanging down there – obviously to be rude, pornographic. 'Cause we were pretty graphic back then, all the old blues guys were. We weren't a punk band, but we might as well have been. It was always the ethic: when you play, play with balls."

In the cavernous rehearsal studio in Los Angeles where I meet him a few weeks before the New York show, Buckingham, 60, is thinking back too. Success came quickly after he and Nicks joined Fleetwood Mac – within nine months the Fleetwood Mac album was No 1. By the end of 1975, he and his girlfriend were millionaires. But it came at a personal cost. The marriage of Christine and John McVie was already in trouble, not helped by the bass player's heavy drinking, and Buckingham and Nicks' relationship foundered too. Nicks found herself "getting a lot of attention. I was the new girl in the band. And what could I do? Put a bag on my head? I tried to be as low-key as possible. Christine always wanted to be behind thousands of banks of keyboards. That was her persona. She never wanted to be up front. She had no interest in walking out in the middle of the stage and being the lead girl singer."

The fracturing of the relationships was played out in the new songs that McVie, Nicks and Buckingham were writing. At the rehearsals in Florida in 1976 that presaged the recording of Rumours, the first new song Fleetwood Mac played was Buckingham's Go Your Own Way. "Loving you isn't the right thing to do…" it began. "Packing up, shacking up's all you wanna do…"

Was he apprehensive about presenting these lyrics to Nicks?

"Hell no!" the guitarist fires back. "They were true. Yes, they were frank. I wasn't mincing any words about anything. But they were also offering a choice to her."

In Second Hand News he describes his rejection by Nicks, but also – as he sees it – "humorously" offers her the chance to make a booty call: "when times go bad, when times go rough, won't you lay me down in the tall grass and let me do my stuff…"

"At first I thought that was a little rude," says Nicks. "I don't think I saw a lot of humour. But now I kinda can." Indeed, those lines are emblazoned on the T-shirts being sold on the Greatest Hits tour.

Christine McVie, meanwhile, wrote Don't Stop (a message to her soon to be ex-husband: keep on being positive) and You Make Loving Fun (seemingly a message to her new lover, the band's lighting director). She also wrote Oh Daddy, a paean to Fleetwood.

"I think that whole thing was about the fact that I was the only family guy," says the drummer – he had two daughters with Jenny Boyd, sister of Patti, although his marriage was in crisis too. He was also the band's de facto manager at the time. "And I was in the middle of my mess – and in the middle of their mess. And I like to think I was some help to both Chris and John, as a friend. And I think it alludes to this chap desperately trying to keep everything together as a father would. Stop people being horribly hurt. And," he smiles, "I think she realised that I needed to be thrown a bone as well!'

Buckingham thinks that the three couples were heading for their individual breakdowns before the new line-up of Fleetwood Mac ever took shape, "but I think the coming together of us as a band became a catalyst for speeding up the process". Was that process hastened by success, and by the cocaine use that was featuring increasingly within the band?

"Yeah, sure," he shrugs. The making of Rumours was conducted in a blizzard of the white stuff: a bag was kept ever-ready under the mixing desk. "We all were drinking too much and smoking too much pot and doing pretty much what everybody in that subculture was doing, and maybe more of it. Maybe possibly (that was] somehow exaggerated by our circumstances."

Nicks even wrote a song for Rumours about cocaine: Gold Dust Woman.

"You know what's so very weird?" she says now. "Gold Dust Woman was written before the cocaine really became serious in our lives. And the line 'take you silver spoon and dig your grave' is the only time that I actually said something explicit – the silver spoon is obviously a coke spoon. But I had only been on the fringes of it when I wrote that song. So I always think that it was a very heavy premonition. That I somehow saw it coming."

Over the following decade things became even worse. During the making of 1987's Tango In The Night, a zonked-out Fleetwood was reduced to crashing in a Winnebago motor home at the bottom of Buckingham's garden. Over the course of the year-long recording, Nicks showed up for approximately three weeks. She had been prescribed Klonopin to help wean her off cocaine; she became addicted to the tranquilliser instead.

"I was in really bad shape then," she admits. "I felt bad about the eight years that I lost." It was worse, she says, than the cocaine years. "No creativity. Creativity gone. You just wanna lay on the couch, watch movies, have a glass of wine, smoke a joint, call the deli, eat a lot of really fattening food. And get up the next day and do the same thing. It's just, you know, a nightmare."

Fleetwood, meanwhile, was a full-time party animal, bunkered up in the Malibu home he dubbed The Blue Whale with some like-minded crazies.

"Oh, lunacy!" says Fleetwood brightly of the four-day parties with a gang including actors Nick Nolte and Gary Busey. "A few people, yes, were escorted on all fours into their wives' vehicles to be ceremoniously taken home, hopefully safely. And I think all that horrified Lindsey." Indeed it did: the guitarist left Fleetwood Mac after the making of Tango In The Night. He didn't speak to Fleetwood for eight years, before rejoining the band for 1997's The Dance.

Speaking to the members of Fleetwood Mac is hugely entertaining: so extreme were their lifestyles and the ructions – and so monumental was their success – they're long past being embarrassed or diplomatic. And the affection and closeness between them all is apparent, even if they won't be in the same room as each other to talk to the press.

The seeming bonhomie is hard to reconcile with the rancour that attended the end of the band's last tour. Nicks "hated" the trek in support of 2003's Say You Will, the first without Christine McVie. She felt isolated, and the lack of female companionship was compounded by Buckingham's self-confessed "abrasive" onstage behaviour. Nicks was particularly underwhelmed by the guitarist's insistence on bringing his solo material into the set – notably the song Come. "Think of me sweet darling, every time you don't come," goes the song about one of Buckingham's ex-girlfriends. The actress Anne Heche? "Possibly," grins the puckish guitarist, "possibly. Yes, Stevie didn't like me doing that song. She left the stage." At the end of the tour Nicks vowed never to work with Buckingham again.

But, six years on, here they are again. What did Buckingham do to make amends to Nicks?

"Well, this is a Greatest Hits tour so there should not be anything to fight about," replies Nicks, who's still a wafty, scarf-loving presence. "And, you know, time passes. Things subside. And I thought, why not?"

"You don't have enough time or energy to start hacking out stuff again," observes chipper Mick Fleetwood. "We can't do it. At a certain point you have to learn to address things in a more civilised, less time-consuming, and hopefully more intelligent way. As it is in my lifestyle: I still enjoy drinking wine. And eight times a year I'll go, 'oooohhh, is that what it sort of was like?' The hangovers are catastrophic." He grins ruefully. "So you just don't go there any more."