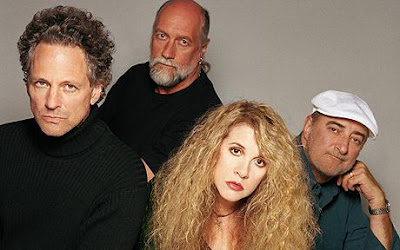 There is probably no group in the history of pop music that would provide such a diverting evening’s worth of pub quiz questions – and not one of them to do with the groups’s musical output.


No points for identifying Rumours as Fleetwood Mac’s biggest-selling album. But how much money did the drummer Mick Fleetwood fritter away on cocaine? Name the guitarist who in the middle of a tour walked out of a hotel one day to “buy some groceries” and instead vanished into a religious cult? Which prescription drug was the singer Stevie Nicks addicted to for eight years after she’d freed herself of her addiction to cocaine. And which male members of the group did Nicks not have an affair with – or at least, not as far we know?

The Rolling Stones might have been more dangerous, Led Zeppelin more debauched, but, when it comes to grand guignol drama, soap-opera bathos and sheer flagrant excess, it is Fleetwood Mac who take the biscuit – or, in their case, make that a crate of the Dom Perignon ’66, and be quick about it.

Fleetwood Mac are back on the road again for the first time in six years. It is the latest chapter in a saga that has lasted for 37 years, featured a cast of dozens and often resembled nothing so much as a kind of soft-rock version of the misery memoirs of Dave Peltzer.

In the beginning, they were a blues band, their name a cannibalisation of those of two of the founder members, the drummer, Mick Fleetwood and bass guitarist John McVie. The third founder was Peter Green, the most brilliant guitarist of his generation.

In 1969, the group had their first number one single, Albatross, and for a while their albums were matching the Beatles and the Rolling Stones in sales. Then the soap opera began. In 1970, Green took LSD for the first time, beginning a catalogue of events that would lead to him attempting to give away all his money and culminating in him being diagnosed as schizophrenic. On an American tour, the guitarist Jeremy Spencer walked out of his Hollywood hotel one morning “to buy some groceries” and didn’t come back – claimed by the Children of God cult. A third guitarist, Danny Kirwan, ended up in psychiatric hospital. A fourth, Bob Weston, was fired after conducting an affair with Mick Fleetwood’s wife.

By the early Seventies, Fleetwood and McVie were marooned in Los Angeles, seemingly on their uppers. They joined forces with a young couple Lindsey Buckingham and Stevie Nicks, to form what would become the classic version of Fleetwood Mac, built on an improbable chemistry of opposites: the reliable old stagers Fleetwood and McVie; Nicks, the unreconstructed fantasy flower-child; Buckingham, the Byronic, brooding musical genius; and John McVie’s wife Christine, a sensible English girl who sang like an angel and, like her husband, was fond of a drink.

An eponymous album went to number one in America. The follow-up, Rumours, released in 1977, was the apoethosis of the California soft-rock sound, but what added immeasurably to its appeal was the tangled and incestuous mess that the album chronicled. Buckingham and Nicks were breaking up after five years together. The McVies’ seven-year marriage was coming to end, Fleetwood was conducting an on-off affair with Nicks while divorcing his own wife, Jenny Boyd.

Heartache, loathing and recrimination had never sounded so beguiling. Rumours, as Lindsay Buckingham put it, “brought out the voyeur in everyone”, and went on to sell more than 40 million copies, propelling the group into the realms of bacchanalian self-indulgence.

Christine McVie bought two Mercedes, with licence plates bearing the names of her dogs, to park outside her Beverly Hills mansion, and went on to have affairs with the band’s lighting director and Beach Boy Dennis Wilson. Buckingham took up residence in the swanky Four Seasons Hotel – for two years.

Nicks went on to have affairs with both Joe Walsh and Don Henley of the Eagles.John McVie, meanwhile, bought an ocean-going yacht, suffered an alcohol-induced seizure and was arrested for possession of firearms.

“We decided to be comfortable and lost control,” Fleetwood would later reflect in his autobiography. He somehow managed to go bankrupt after a series of disastrous property ventures, while at the same time remarrying Jenny Boyd, only to divorce her again.

In the years since then, the group have broken up and and reunited with a regularity that has bewildered even their most devoted followers. Buckingham departed in 1988, following a particularly heated meeting. “It got physically ugly,” John McVie would later recall. “I just said, 'Lindsay, why don’t you just leave?’ He left. But what I meant was, 'Why don’t you leave the room?’” He was gone for nine years. In 1998, apparently exhausted by it all, Christine McVie retired altogether and now leads a quiet life in Kent.

But it is Nicks who has remained the most intriguing member of the group. With her improbable black-chiffon confections, her songs about Celtic witches and gipsies, her enthusiasm for Tiffany lamps and illegal substances, Nicks embodied the idea of rock music as a sort of romper room for grown-ups to act out their fantasies.

During the Seventies and Eighties, her addiction to cocaine became the subject of myth. She finally kicked her cocaine habit in the Betty Ford Clinic, but then became addicted to tranquillisers.

When the group toured in 2003, relations between them were said to be difficult. But, like so many groups of their era, they have discovered that the cachet of the brand name is far greater than the sum of its individual parts, and that no matter how painful it may be, habit, financial imperatives or the simple want of a better idea will inevitably bring them together again. Psychotherapists call it co-dependence. Nobody would call it love.

Reports from the current tour suggest the group are getting along famously. It would be the most unbelievable chapter in the saga yet.