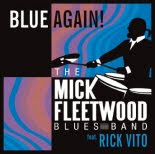 Back in 2008 Mick Fleetwood and his Blues Band Featuring Rick Vito played the 21st International Notodden Blues Festival which ran between July 31, 2008 and August 3, 2008 - prior to the European release of "Blue Again".  Here is a backstage interview with Mick Fleetwood and Rick Vito. The interview is approximately 20 minutes long and the file size is 18mb.

For more info on The Mick Fleetwood Blues Band, and to hear samples of the CD, visit 429 Records