REVIEW: FLEETOOD MAC in DUBLIN Reviewed by: The Irish Times 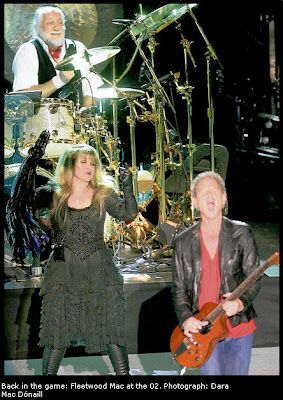 
Fleetwood Mac are back on the road, 32 years after the generation-defining Rumours album. This time around, there is no new album to plug and no new songs to roll out. Yesterday’s gone, but those golden sun-drenched songs roll on forever.

Stevie Nicks and Lindsey Buckingham, whose combustible relationship sparked Rumours , emerge hand-in-hand and in warm spirits. Heathcliff and Cathy are chilling out.

Wrapped in her familiar shawls, Nicks is still playing the beguiling gypsy queen. Now 61, she meanders across the stage in long, flowing, chiffon dresses. For those of a certain vintage, it’s as if that fabled footage of Nicks belting out Rhiannon in 1976 has come to life.

Buckingham, with that familiar icy stare, is her counterpoint, all darkness and danger.

The set opens with Monday Morning , from the band’s eponymous second (white) album. The second song, The Chain , is the first of seven from Rumours . What is striking is how time and familiarity have not aged the power and beauty of these songs.

A blistering performance of Go Your Own Way is a real highlight. The song is Buckingham’s finest hour; his defiant guitar driving it forward with relish. Buckingham is very much the first among equals, dominating the stage with two underrated songs, Big Love and Tusk , commanding a standing ovation on each occasion.

Nicks is strongest on Dreams and Sara , two soft rock classics. Stand Back , one of her solo hits, has aged much less well.

There is an extraordinary synergy between the band and the middle-aged audience when Nicks sings that poignant, familiar line from Landslide – “And I’m getting older too”. It’s a terrific performance of a great song.

The concert did not work on all levels. Fleetwood Mac has always been a tapestry of different colours, so the absence of Christine McVie, who has retired from public performance, was keenly felt. Buckingham and Nicks dominated the vocal duties but McVie’s unplayed piano and echoey vocal style were conspicuous by their absence. McVie’s best songs – Songbird and You Make Loving Fun – are part of the Fleetwood Mac canon. The band did pay tribute to one former troubled member when Buckingham and Mick Fleetwood rolled out Peter Green’s Oh Well . It was good to see his contribution acknowledged.

The gig was also a reminder that Fleetwood – the mainstay of the band since the Peter Green era, is one of rock’s finest drummers – even if the solo on World Turning veered close to Spinal Tap country.

Fleetwood Mac also encored with the old foot-stomping Bill Clinton favourite, Don’t Stop . The final song was Nicks’s glorious Silver Springs , tossed away as a B-side back in the day, but given its due recognition here.

At the end, the band lingered on stage, revelling in the warm embrace of the crowd long after the music had stopped.
Nickslive at Monday, October 26, 2009
Share