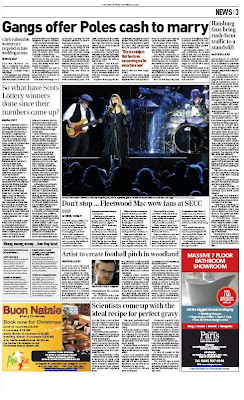 To bow out gracefully or to keep trading on long-since earned laurels.

That must surely be a dilemma for the spate of ageing rockers re-emerging to tour their 30-year-old reputations.

But Fleetwood Mac have put such thoughts to one side and are now in the middle of a world tour, the dates for which would make a younger band exhausted to contemplate.

Having played America and mainland Europe, the group kicked off the UK leg of their tour last night at Glasgow’s SECC, their only Scottish date.

The band are different in that they are not reforming. Fleetwood Mac never broke up but instead worked their way through a remarkably fluid line-up that saw them lose two guitarists to mental institutions and one to a cult. 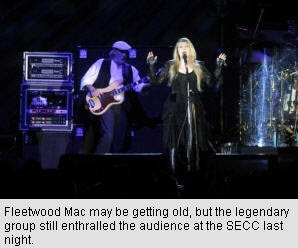 Their current incarnation includes four from the 1977 Rumours tour; Bassist John McVie, Mick Fleetwood on drums, guitarist Lindsey Buckingham and Stevie Nicks minus singer Christine McVie, who has chosen retirement rather than touring with her ex-husband.

They are rowdy, they are enthusiastic and they convincingly vow to get the party started. However, they still look, and there is no way of phrasing this delicately, old.

Fleetwood’s grey beard and Nicks’ witchy dark frock aside, the group performed a slew of hits with energy belying their years and played with powerful conviction. 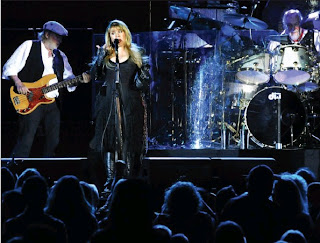 Nicks’ ethereal tones have dimmed slightly with age but the years have not withered Fleetwood’s drums.

Fans no doubt turn out, not only for the music, but also to see whether the legendary tensions in the group still exist. From the on-stage rapport and affection between Buckingham and Nicks, it would seem not. However, the emotion of the songs is what gives them their edge and stops the re-emergence of Fleetwood Mac from being jaded.

The crowd, who mainly matched the band in years, were beyond delighted with a fast-paced The Chain, an ethereal Rhiannon and a spine-tingling Big Love.

And surely that’s reason enough to keep rolling out those greatest hits. 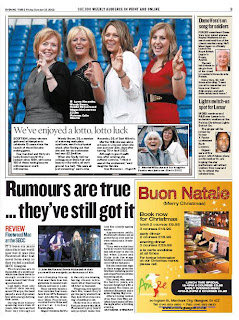 REVIEW:
Fleetwood Mac at the SECC


IT'S been six years since their last world tour but it was like Fleetwood Mac had never been away as they rocked a packed SECC Glasgow.

The foursome are in the middle of a world tour which sees them travel to enough countries to make a band half their age exhausted.

Last night, their only Scottish date among seven UK stops, the band played a slew of greatest hits with energy defying their years.

During their history spanning more than 40 years, Mac have worked their way through an ever-changing line-up that saw them lose two guitarists to mental institutions and one to a cult.

Singer Christine McVie is the only one missing, having chosen retirement rather than touring with her ex-husband.

The group, now aged in their 60s, vowed they'd get the party started but they look (there's no nice way of putting it) old.

Nicks was in a witch-like lace dress while Mick Fleetwood's grey beard and ponytail make him look like a badly-ageing rocker.

Appearances aside, Fleetwood's drums are as powerful as ever and he even rocked out a 10-minute solo.

They were notorious for their rock'n'roll band bad behaviour in the 70s but when Linsey and Nicks took the stage holding hands it seemed old rivalries had gone.

But the emotional edge to their songs gives the hits their enduring power and stops Fleetwood Mac becoming jaded.

The crowd, who match the band in years, are beyond delighted with a fast-paced The Chain, an ethereal Rhiannon and a spine-tingling Big Love.

After a rousing version of Go Your Own Way, satisfied fans headed off into the night after a thrilling evening.
Nickslive at Thursday, October 22, 2009
Share