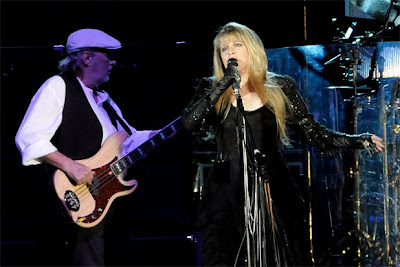 
Most bands go through their fair share of drama. Some have inter-band relationships of a non-platonic nature, a few manage to forge successful careers at the top of the charts, even fewer manage to amass a back catalogue that spans decades.

Fleetwood Mac have done all this and more. Their personal history is as compelling as it comes, and alongside this they have scored hit after hit. They’re a songwriting arms factory that has produced lethal pop weapons such as 'Gypsy', 'Second Hand News' and 'Gold Dust Woman' - and they’re back.

It’s in the pursuit of showcasing these classic songs that four-fifths of the most commercially successful combination of Fleetwood Mac take to the stage at the SECC.

Without Christine McVie, vocal duties are left to Stevie Nicks and Lindsay Buckingham meaning McVie’s musical contributions are omitted, so no 'Little Lies', no 'Songbird' and no 'Everywhere', this doesn’t put a damper on the evening though, as there’s still plenty to keep everyone happy.

Early renditions of 'Monday Morning' and 'The Chain' from their second and most tempestuously recorded album Rumours, along with Buckingham’s words on the making of the album itself, warms up the sold out arena crowd nicely. ‘We were going through such emotional turmoil,’ Buckingham recounts. Thankfully, going by tonight’s onstage comradeship, with Buckingham and Nicks holding hands and singing to each other, all this seems to be in the past.

Highlights include Buckingham’s solo acoustic rendition of 'Big Love' which showcases his technical ability as a guitarist, Nicks' faultless performance of 'Landslide' and pre-encore set finisher 'Go Your Own Way', which easily commands the biggest applause of the night.

After thanking the rest of the band, Mick Fleetwood delivers one of the most confusing drum solos ever in encore opener 'Worlds Turning' by shouting in a Scottish accent and (what sounds like) rapping in a Jamaican accent.

Closing the set with a few too many words, Fleetwood thanks the crowd, which is a sweet, if slightly drawn out touch.

He can be forgiven though - if I’d been feeding and nurturing the cash cow that is Fleetwood Mac so successfully for forty years, I’d be looking to milk it too.
Nickslive at Wednesday, October 28, 2009
Share