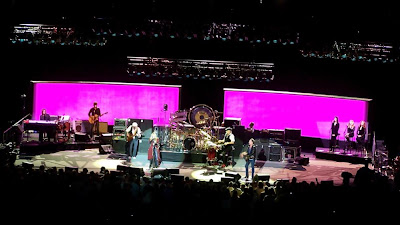 It's a funny thing about Fleetwood Mac, when I hear them I'm instantly transported to a fantasy 1970s that most likely never even existed and it's all what I imagine it was like based on stuff I've seen on TV. I'm pretty sure I'm to young to actually remember Rumours when it was originally released, so just why it has such an effect is beyond me. But I like it.

I'm not a huge Fleetwood Mac fan, and I'd never seen them live before but when I heard they were touring again I decided to get myself some tickets and check it out. The current line up is the same as the Rumours line up, but sadly minus Christine McVie and they're not promoting any new material so I knew it would basically be a greatest hits package, which suited me.

Continue to The Morningstar for the full review/pictures
Nickslive at Thursday, October 29, 2009
Share