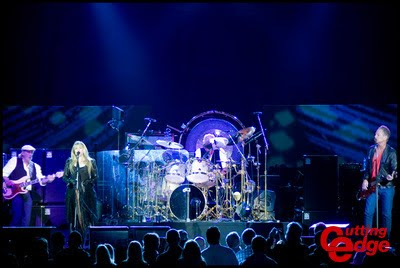 
The faithful concert-goer was a wrenching dilemma for Wednesday. While the legendary Pixies were in Vorst Nationaal, Fleetwood Mac came to the Sports Palace. For our younger readers: Fleetwood Mac is one of the most successful pop groups of all time. They have been more than forty years with varying occupation and that career is full of hits world, affairs, drugs, deep valleys and re-employed persons (sometimes with the help of U.S. presidents, is not it, Mr. Clinton?). 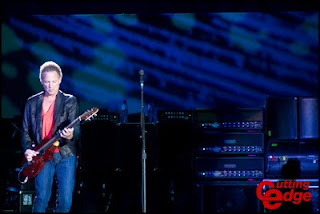 The Sports Palace was so - of course - completely sold out and occupied by an older crowd that looked expectantly to Mick Fleetwood, Jon McVie, Lindsey Buckingham and Stevie Nicks. In after Christine McVie, who has pulled out, the original lineup is responsible for one of the best albums of all time, "Rumors" in 1977. Many songs from this album took over the setlist Wednesday.

Unfortunately there was something wrong the first songs with the sound. The singing between Buckingham and Nicks Sat then frequently wrong. Fortunately this defect is repaired from "Second hand news". The pace here was irresistible and you heard back a worldwide group that hits at the time but had for the taking. The versions of "Rhiannon" and "Go Your Own Way" were swirling and were charged with extreme enthusiasm.

Stevie Nicks' voice is still as impressive raw but unfortunately you can in the dynamic on stage and not her appearance alongside the age look. Stevie is an old 'Gypsie' become female. The three men have stood the test of time are physically well. Buckingham was especially excited as a toddler to wallowing in our achievements with his guitar solos, which sometimes strange impression that the drummer and bassist Fleetwood Mac "McVie were just a begeleidinsband. If you are the surnames of these two together you know better, however. Fortunately that imbalance was restored during the encores.

The absolute highlight of the evening came when all of the stage and there was a series of calm songs played by the duo Buckingham / Nicks. In a completely reworked version of 'Big Love' from Lindsay Buckingham in 1987 led to his own goose bumps. The ingredients you will need? A nice explanatory introduction, an impressive guitar playing and charismatic appearance. The standing ovation was not extinct when a retained 'Landslide' followed. This number is also not retreaded by Smashing Pumpkins later, but here's Stevie Nicks gave passionate voice to many weak legs in public.

The undersigned has nevertheless also missed Christine McVie. Her voice is simply an essential ingredient in the Mac menu Fleedwood. A song like "Bird Song" was the icing on the cake was impossible but can be sung by someone else than by Mrs. McVie. The setlist is also what is respected. We had the best bass solo of all time, namely the mid Jon McVie 'The Chain', preferred not to hear the beginning of the concert, where a little lost in the noise problems. Also we were waiting in vain at our favorite Fleetwood Mac song 'Everywhere'.

But that is obviously critical personal edge. Fleetwood Mac and spoiled all the enthusiastic crowd with strikingly balding men in the front rows was moving to see. The group had also shown himself enjoyed the concert and made everyone clear that their musical testament has no expiration date.