SEX AND DRUGS AND FLEETWOOD MAC . .Superstars are Coming to Dublin 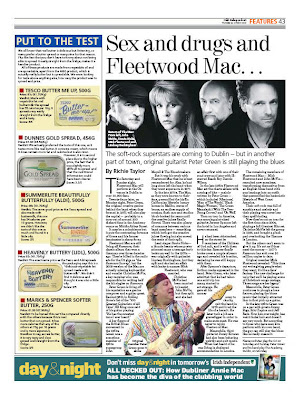 Sex and drugs and Fleetwood Mac. . .
The soft-rock superstars are coming to Dublin -- but in another part of town, original guitarist Peter Green is still playing the blues

This Saturday and Sunday night, Fleetwood Mac will perform in the O2 venue in Dublin to over 20,000 fans.

Twenty-fours later, on Monday night, Peter Green, the original creative genius behind the band when they formed in 1967, will also play the capital -- probably to a turn-out of around 200 diehard fans in the Academy venue on Middle Abbey Street.

It may be a coincidence but it puts the contrasting fortunes of Green and his former bandmates in sharp focus.

Fleetwood Mac are still living off Rumours, their classic album that won a Grammy over three decades ago. They're billed in the radio ads for the O2 gigs as "the Rumours line-up", but the 2009 version of the Mac are actually missing keyboardist and vocalist Christine McVie, a key member who was responsible for writing half the hit singles on Rumours.

Peter Green is living off his reputation as a genius composer and a guitar great. Ranked 38th in Rolling Stone's list of the "100 Greatest Guitarists of All Time", BB King once said of his guitar playing: "He has the sweetest tone I ever heard."

A key figure of the British Blues movement in the 1960s, Green was a sometime member of 1960s supergroup John Mayall & The Bluesbreakers.

But it was his work with Fleetwood Mac that he is best remembered for. Alas, he had long since left the band when they went supernova in 1977.

In the late 1970s, The Mac, as they were known to their fans, personified the idyllic Californian lifestyle: luxury homes in Malibu, crates of booze, an endless supply of cocaine, flash cars and studios block-booked for years until the creative juices finally flowed. There was also plenty of romance between various band members -- something which both got the creative juices flowing but also sowed the seeds of their split.

Lead singer Stevie Nicks -- a blonde beauty whose poster adorned many a teenage boy's bedroom wall in the 1970s -- was originally with guitarist Lindsey Buckingham, but they split and she had an affair with lanky drummer Mick Fleetwood, who was married.

Christine McVie had been married to bassist John McVie, but they split and she had an affair first with one of their road crew and later with ill-starred Beach Boy Dennis Wilson.

In the late 1960s Fleetwood Mac set the charts ablaze with a string of hits -- mainly written by Peter Green -- which included 'Albatross', 'Man of The World', 'Black Magic Woman', 'The Green Manalashi (With The Two-Prong Crown)' and 'Oh Well'.

Then on tour in America, one morning pint-sized guitarist Jeremy Spencer left the hotel in Los Angeles and never returned.

He had been sidetracked on the street by members of the Children of God cult, and is with them to this day. Spencer finally broke cover a couple of years ago and revealed his location, declaring he was still happy with them.

After Spencer's departure, further cracks appeared in the band. Peter Green, who later admitted that he had taken one acid trip too many, started to act strange. He gave all his money away to charity, quit the band in 1970 and lived the life of a hermit. He later took a job as a gravedigger in order to make ends meet. He was never to rejoin Fleetwood Mac.

Meanwhile, third guitarist Danny Kirwan had also been behaving weirdly and quit music. When last heard of he was living in sheltered accommodation in London.

The remaining members of Fleetwood Mac -- Mick Fleetwood and John McVie --recruited new members, transforming themselves from an English blues band with pop leanings into an outfit that personified the hedonistic lifestyle of West Coast America.

Their soft rock was full of sunshine and melody and their playing was never less than spellbinding.

Now they're out on tour for the first time since 2004, playing a full Greatest Hits set. Christine McVie left the group in 1998, and bought a plush pad overlooking the Thames in London.

But the others can't seem to give it up. It's not as if they need the money -- 1977's Rumours has sold over 30 million copies to date.

Original member Mick Fleetwood revealed: "This time out we're giving people what they want; it's like a fans' fantasy. The new challenge for us is that we'll be playing some of Christine's songs onstage. These songs are her legacy."

Meanwhile, Peter Green continues to plough a lone furrow, playing the blues music that initially attracted him to first pick up a guitar.

In the late 1960s Green was on a par with greats Jimmy Page, Eric Clapton and Jeff Beck. Now he's overweight, has weird facial hair and doesn't say very much. But according to those who have seen him perform with his own band, the guy can still play the blues like he really means it.

Fleetwood Mac play the O2 on Saturday and Sunday. Peter Green and his band play The Academy, Dublin, on Monday