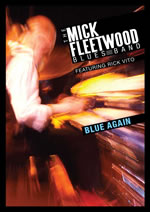 429 Records are confirming that Mick Fleetwood's DVD "Blue Again" will be released on January 12, 2010.  No other details available. I'm assuming this is the St. Louis show that the audio disc released earlier this year is from, but there was a London show filmed for DVD - so it's possible that it's from that show.

Timed perfectly to coincide with their February/March, 2010 tour dates in Australia and New Zealand with Michael McDonald and Boz Scaggs.