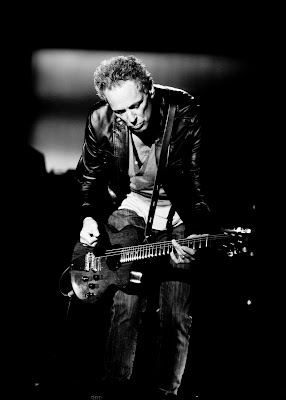 It’s not every day that you get the opportunity to photograph and review a super group whose various incantations have spanned the course of 5 decades, but that’s exactly what we were offered on Tuesday night as Fleetwood Mac graced the stage of the NIA. Were we excited? Erm… an understatement!

The Rumours line up – comprising of Mac ever presents and band name contributors Mick Fleetwood and John Mcvie, together with the musically talented Lindsey Buckingham and the irrepressibly beautiful Stevie Nicks made their way to the stage much to the jubilation and adulation of the buoyant crowd. Unfortunately the only omission from the line up was keyboard player come vocalist Christine McVie. This was a little disappointing as it meant that certain crowd pleasers such as “Songbird” and “Oh Daddy” would be left out of the set.

The crowd, the majority of whom were in the similar age bracket as the Mac, were initially a little restless after their car parking fiasco and the fact that Fleetwood’s were 30 minutes late on stage, but these minimal mutterings soon turned to cheers and whoops of joy as the gang kicked off with ‘Monday Morning’ . This initial jubilation turned to near pandemonium as one of their classics was unleashed, with the tumultuous driving baseline of “The Chain”. To say the crowd loved it is somewhat of an understatement. It was one of the highlights they had been waiting for. Result.

It has to be said that Nicks and Buckingham are consummate front “(wo) men”. Admittedly it took Stevie’s voice a while to warm up – she failed to reach the high notes in “Dreams”, but once she got in her stride, it was the same haunting vocals and unique inimitable style that we’ve become accustomed to. Interspersed amongst the songs were pertinent musings by the front two. “We’re here to have fun” announced the female singer, and judging by the crowd’s reaction so were they.

The band then ploughed their way through 2 hours of vintage Mac, belting out hit after hit from their chart topping albums “Fleetwood Mac” and “Rumours” right through to “Tango in the Night”, tugging on the heart strings with tunes like the haunting “Rhiannon” and then drawing gasps of amazement due to the guitar playing excellence of Buckingham with his solo version of “Big Love”.

What becomes apparent whilst watching the Rumours line up is the tangible amount of chemistry, love and tension between the members of the band. It would be remiss of me to go through their colourful history, but needless to say it adds to the band dynamic and overall performance. Fleetwood Mac aren’t just a band, they are a family. Nowhere was this more apparent than when Nicks, gave her ex husband Buckingham a heartfelt hug centre stage, the emotion was palpable.

For me the only disappointment was the lack of pre-Buckingham/Nicks Fleetwood Mac. By the very nature of the lineup Peter Green tunes were always going to be in the minority but it would have nice to throw in some of the more popular hits from such an important period in the bands history. The only exception to this was “Oh Well” adapted for Buckingham’s style, but very much a Peter Green classic. The crowd lapped it up and in doing so displayed their love of everything pre 1970.

I have to say it was a truly memorable gig, and as talks of a new album are in the offing, it may not be too long before they are donning the stage once more.