If she didn’t mean it, it wouldn’t work. Stephanie Lynn Nicks may have been working as a waitress in a cocktail bar when Fleetwood Mac found her, and cleaning the producer’s toilets to pay for her first record, but the bucktoothed blonde from Phoenix never stopped imagining herself as a Welsh witch goddess.

Thirty-five years on, she hasn’t ceased: swishing about in a bat-winged cape and a diamante half-moon pendant, and bleating about a “ woman taken by the sky”. Mystery-and-magic isn’t merely an act for Stevie. She believes it, and bless her to bits for that. 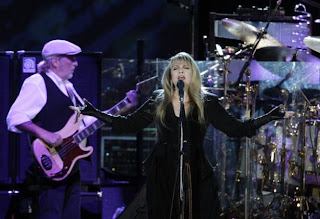 If Stevie on a British stage is what really sends the hackles tingling for the faithful, then it’s only in the context of a truly stunning Fleetwood Mac concert. Her foil and sometime lover Lindsey Buckingham, spindlylegged and still offensively handsome, is a fast-fingertipped phenomenon on guitar. His solo spots for “ Big Love” and “ Oh Well” are breathtaking; the title track of his 1979 folly Tusk is so berserk you can almost taste the Hollywood A-grade in your septum.

Together, they conjure such an electricity that the rhythm section John McVie and Mick Fleetwood, whose British blues band was transformed by the BuckinghamNicks takeover in 1974, can only stand and watch. “ I think I had met my match,” she sings in the sublime “ Sara”, and she looks at him with lazy eyes. He catches the glance, and bites his lip. As the song ends, they waltz and he kisses her hair. It must drive their current partners insane. Because it sure as hell sends a shiver through everyone else.
Nickslive at Sunday, November 01, 2009
Share