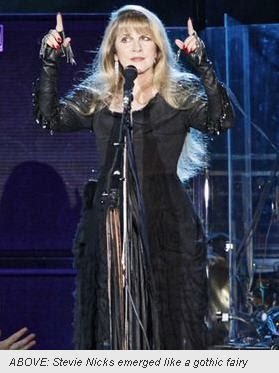 
FLEETWOOD Mac could have retired gracefully years ago knowing their place in rock history is assured.

But they keep coming back for more - and can still conjure up the same magic that made them megastars in their 1970s heydey.

From the moment Stevie Nicks emerged like a gothic fairy, you knew it was going to be business as usual.

The band may have a combined age of 251 years, but they deliver their timeless hits like the grand masters of soft rock they truly are.

With no new material to promote, their Unleashed world tour is all about serving up bucketloads of classic tracks for fans.

And they really are plundering their back catalogue going way back to when they formed as a blues-rock outfit in 1967.

From Peter Green's charging Oh Well through to the synth pop 80s of Tango in the Night, it’s all there in a packed two and a half hour set.

The hair may be greying and the vocals sometimes strained, but that didn't seem to matter.

Crowd favourites were always going to be tunes from their self-titled 1975 album and their career-defining 1977 album Rumours.

Don't Stop and Go Your Own Way had the seated arena on its feet and air guitaring, while the slower Landslide and Sara rekindled the band's trademark dreamy atmospherics.

The biggest cheers went to foot-stomping anthem The Chain.

Frontman Lindsey Buckingham strutted around the stage like his ego was still about to burst.

The guy is a clearly a six-string genius, but it was like he was trying to be cooler than your dad on a wedding dancefloor.

Bassist John McVie and Mick Fleetwood, the founding members, were steady as ever (and bizarrely looking like Chas & Dave with flatcaps and waistcoats.)

But what a shame the line-up lacked Christine McVie, who quit years ago, meaning no more of those lovely harmonies with Stevie.

Mick was barmy, grunting like a mad man in his solos and emerging from behind the drums with spiny red shoes brighter than Dorothy's.

They all - apart from John - gave mini-speeches about surviving in one of the world's biggest bands.

Lindsey thanked fans and reminded us: "You know, we have a convoluted and emotional history."

It's ok, we know Lindsey, and that's what makes Fleetwood Mac still being together that much more alluring.
Nickslive at Monday, November 02, 2009
Share