FLEETWOOD MAC CONCERT HAD A PROFOUND INFLUENCE ON ALICIA KEYS 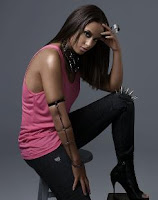 "I wanted melodies that really soared, like the ones I heard at
that (Mac) show."

About two months before recording The Element of Freedom, Alicia Keys witnessed an event that would have a profound influence on her creative process: a Fleetwood Mac concert.

"It was my sister's birthday, and she wanted to see them," says Keys, 29, referring to longtime best friend Erika Rose. The R&B singer/songwriter knew of the veteran band but wasn't entirely familiar with its catalog. "So everyone was like, 'What? You don't know these songs?' "

I believe it was one of the Madison Square Garden shows in NYC last spring where Stevie dedicated Landslide to Alicia Keyes that night.
Nickslive at Monday, December 14, 2009
Share