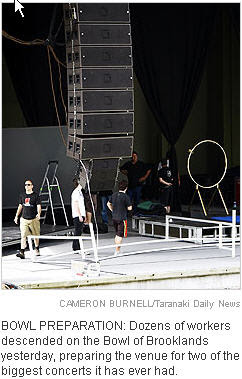 
Supergroup Fleetwood Mac will attempt a sneaky entrance in to New Plymouth today to avoid mobs that have greeted them during their world tour.

They are playing two sold-out concerts at the TSB Bowl of Brooklands this weekend and are understood to have declined Mayor Peter Tennent's offer of a Maori powhiri, or any type of welcome, when they arrive sometime between 3pm and 5.30pm today.

That is unless band member Stevie Nicks can convince her fellow members to accept the powhiri.

New Plymouth Mayor Peter Tennent said Ms Nicks enjoyed the traditional Maori welcome to Taranaki when she was here in 2006.

"She just loved it, but if they don't want it this time and just want to get in the zone to prepare for their concert, I can understand that and fully support it."

The promoter was still trying to convince the band to accept the welcome and experience the difference between New Zealand and the rest of the world, he said.

The decision to slip quietly into the city is apparently to avoid problems similar to those encountered in other countries, where the sheer number of fans turned their arrival into chaos.

If they do not change their minds, they will be visible to their devoted followers for just a few seconds before the concert – as they leave their chartered plane to get into the cars waiting for them on the tarmac.

But just when that glimpse can be had is a closely-guarded secret.

"I won't know when they are due to arrive until just before they take off from Wellington," New Plymouth Airport manager Kevin Hill said yesterday.

Though most flights are registered weeks and months before, there is no obligation for chartered flights to do the same.

"Basically, all I know is a plane is coming and that it will fit at one of our gates. They pay us landing fees and that is it," said Mr Hill.

Whatever the former notoriously hard-living band decide, they have already had their dressing room requirements filled by venue caterers Eurest.

Though they were tight-lipped about just what those requests were. Bowl manager Adrienne Kensington was allowed to say they were quite ordinary.

"Nothing really odd at all. We've had some weird ones before, but this time we didn't have to go out of the country to get everything they wanted."

The two New Plymouth concerts are the last in the band's 10-month Unleashed tour.

More than 17,000 fans are expected each night at the outdoor venue and New Plymouth is bracing itself for 20,000 visitors from outside the region.