-A ONCE IN A LIFETIME PERFORMANCE FEATURING THE CO-FOUNDER OF FLEETWOOD MAC, benefiting STAND UP FOR KIDS

HOLLYWOOD- In efforts to raise awareness about the shocking statistics and unforgiving reality concerning homeless children in the United States, We.The.Children. Project has created a pre-Grammy event set to kick the New Year off with a charitable boom. This year’s hottest Grammy kickoff party will commence on January 28th 2010 at The House of Blues in Hollywood, CA. We.The.Children. 2010 will be the ultimate Pre-Grammy talent competition, and philanthropic gathering. While most charitable events are giving away up to 30% of their profits, We.The.Children. Project is giving away 50% of the proceeds donated directly to StandUp For Kids. The Pre-Grammy party will feature live music, dancing, and cocktails, A-List celebrities, Grammy Nominees and the Best of the best of the entertainment Industry will be in attendance. All ticket buyers will receive a copy of The Mick Fleetwood Blues Band featuring Rick Vito “BLUE AGAIN” DVD, which is scheduled to be released on January 26, 2010. An EXCLUSIVE private dinner will be held at the Foundation room for all celebrity participants including celebrity endorsers, host committee and judging panel, featuring Mick Fleetwood Private Cellar Wine with a special toast by Mick Fleetwood. Our creative environment will be a welcome space for songwriters, artists, and those who appreciate innovative efforts, to commingle.

The Mick Fleetwood Blues Band feat. Rick Vito is set to perform at the We.The.Children. Grammy kick-Off party. Mick Fleetwood, the iconic co-founder of Fleetwood Mac, is celebrating his blues heritage with his Grammy nominated band just days before he learns if he and his band will take home the Grammy for Best Traditional Blues Album. The Mick Fleetwood Blues Band features a tribute to the original Fleetwood Mac, the all-male blues band that started it all in 1967. Bringing together four stellar Blues and Rock musicians, Mick Fleetwood presents a band that is as current as it is nostalgic. At the front of the group is Rick Vito, veteran Bluesman and former Fleetwood Mac vocalist and lead guitarist. The band pays tribute to the Mac's early days, when it drew heavily on American blues music and produced hits such as "Albatross," "Oh Well" and "Black Magic Woman" (which was covered by Santana). The band also offers some essential blues covers in every show.

We.The.Children. Project has furthermore endeavored to offer both amateur and professional songwriters the chance to perform at the We.The.Children. Charitable celebration. The songwriting competition will begin accepting entries on November 2nd 2009 and will conclude on December 25th 2009, with the finalists performing at The House of Blues in Hollywood on January 28th for a panel of celebrity judges. More information about entering the “Write Your Song” competition can be found at http://www.wethechildren2010.com/

As we approach the holiday season, and the awards ceremony season in this coming New year, it is so important for the community to get involved and lend a hand to those who are less fortunate and in need. Over the last month, We.The.Children Project committee members have began a friendship with the StandUp for Kids non-profit charity. Founder,  Asal Masomi, comments that the partnership has, “…opened our eyes to the shocking statistics concerning homeless children in Los Angeles. There is an epidemic in the United States of children who are living on the streets, going hungry and sleep-deprived, on a regular basis. We have the resources and the opportunity to improve this situation, within the country, but more importantly in our very own backyards.”

We.The.Children. Project members have taken time out of their personal schedules to hit the streets in order to meet homeless children and they have much to report from their experiences. Several committee members took a trip to Venice Beach, CA where they met with children who were willing to tell their stories about their daily lifestyle. Many of these kids are spending their nights sleeping on the beach. They approach, not asking for money, but only asking for food and blankets to keep warm during these coming winter months. When offered any resources (food, clothes), the kids were always grateful and polite. They reported too, that they understand and believe that people look down on them as if they were criminals. But the reality is, their current living situations are often directly due to ‘family problems,’ often times implying an abusive family situation where these children felt their only option to end the abuse was choosing a life on the street. Executive director Viola Rock urges, “These kids are hungry, cold, lonely and scared- but they are intelligent, respectful, and talented. We need to get involved, to give them a helping hand.”

A portion of the proceeds will go to StandUp for Kids a non-profit organization. StandUp for Kids helps homeless and at-risk youths age 21 and younger tackle some of their everyday obstacles and work towards a life off the streets. StandUp for Kids further, supplies basic necessities such as food, clothing, and personal hygiene products, in addition to a wide array of services, including assistance with housing, education, vocational development, counseling, health and medical services, transportation and legal assistance. For more information about this organization visit their website at www.standupforkids.org.

We.The.Children. Project is a philanthropic for-profit business model that creates opportunities for communities to get involved with important issues relevant to the current economic situation and current world events.  The word “children” is a metaphor for all the people of our nation. We.The.Children. Project is a for-profit business model that donates 50% of all profits directly to the non-profit charities that they are partnered with. We.The.Children. Project has been inspired by the continued call for action by our Commander in Chief, Barack Obama. Their general philanthropic focus is to raise awareness and help aid the Children of Our Nation- including our nation's youth, the men and service women of the United States military, and those who are in deep need as a result of our current economic climate. 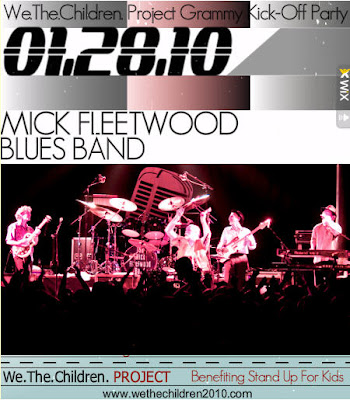